With two Battlefrog Xtreme (BFX) races under my belt, I was pumped to see what I could do in Salt Lake City at Utah’s first Battlefrog.

I checked the BFX list when I arrived on Saturday morning and realised that there were only two other women registered to do BFX. This meant I was in with a chance to get a good placing and was hoping to walk away with a first place finish. I was determined to get five laps done and earn my silver star which meant I needed to complete each lap in under 1.5 hours.

As I prepared for the race I was feeling incredibly nervous. There were only a few familiar faces and I noticed my nervousness as I didn’t have a bunch of friends around to distract me. I took time to say hello to the people that I did know and got myself organised for the race.

As I stood in the BTX tent I saw Hobie Call run past, closerly followed by Ryan Atkins (two of the world’s best OCR athletes). They were racing against each other and Hobie had about a minute’s lead on Ryan. 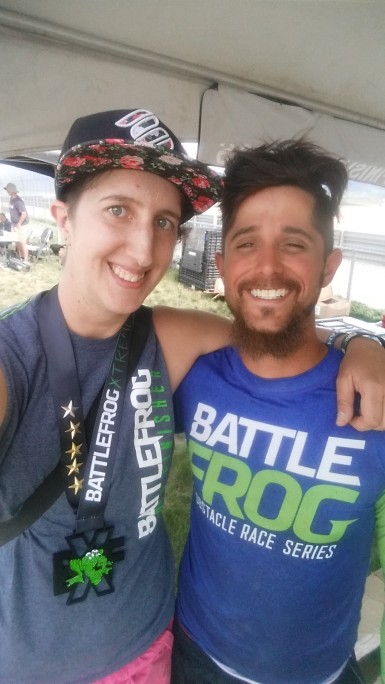 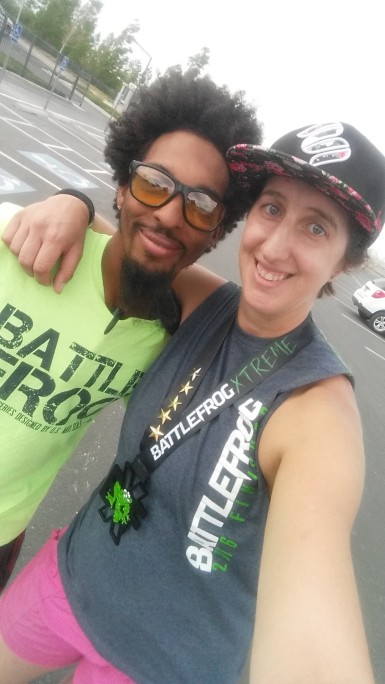 As I waited in the start chute I realised that I’d forgotten to warm up, so I did some jogging on the spot to get the blood pumping and warm up my muscles. Coach Pain’s pre-race talk revolved around remembering who we are. He said that it’s not about the medal that we get at the end, but the person wearing the medal. We need to remember that this race is about each and every single one of us, just being the best that we can be.

On the word “go!”, I started running. I had a strategy to run between two obstacles then walk to the third, repeating that pattern throughout the course. The event was held at a race track so it was nice to run along gravel roads rather than in divets made by horse feet. As I approached the first few obstacles I noticed that I was shallow of breath, so I made sure to take time completing them to not get puffed out.

I made sure to stop at each water station and hydrate on each lap. The air was dry and windy and my lips were chapped within the first 30 minutes of starting. I assessed each obstacle as I approached them to determine which level (novice, intermediate or elite) I wanted to attempt. For most I chose the novice or intermediate to save energy, but there were a few that I chose the elite just to have a bit more of a challenge.

I had lost the other two women doing BFX, but I knew that one was in front and one was behind me. I kept telling myself that I needed to run my own race, so I focussed on one thing at a time and kept pushing on. At the monkey bars I had to take the penalty loop as I couldn’t get a good grip on the bars to get across. The only other obstacle that I failed to complete was the Platinum Rig and on my first lap I did a penalty loop that was 3 time longer than it should have been as the volunteer sent me the wrong way.

At around the 6km mark I hit the dirt mounds but I continued to jog along, including up some of the mounds. As I finished the first lap I was feeling good and made the lap in 1 hour and 25 minutes. I took a quick minute to hydrate before hearing Cupp yelling at me to move my butt so I ran off for the second lap. That’s when things went a bit sour.

Soon after starting the second lap I was hating it. My breathing was shallow due to the elevation, the wind was starting to pick up and was blowing sand everywhere (and it hurt), and my legs were feeling heavy. I kept jogging along but hated every single step that I was taking. I wanted to quit. I wanted to give up after 3 laps. I just didn’t want to be out on course and I thought that I would just do my three laps and re-evaluate how I was feeling

After my second lap I had some glucose gels, Honey Badger electrolytes, and put some more sunscreen on. As I headed out for my third lap I was well and truly over running so I would walk halfway to an obstacle, and then jog the rest of the way. The volunteers were starting to recognise me and they would all ask what lap I was on when I’d go past. I kept drinking plenty of water but always felt thirsty out on course.

I managed to get my four laps done in 6 hours and 5 minutes, and I had more glucose before going out for the fifth lap. I knew that the other lady was too far in front for me to catch up and the third lady had given up after two laps. I was hurting by lap five so I just meandered along and took breaks at each water station. At the rope climb I met two guys who were doing their first Battlefrog so we ended up walking together the rest of the way. I chatted to them about OCR and explained everything about the BF obstacles and they joked that I was their OCR guide.

As I got to one of the last few obstacles I saw Hobie Call with his family so I briefly introduced myself before doing the Tip of the Spear obstacle and continuing on. 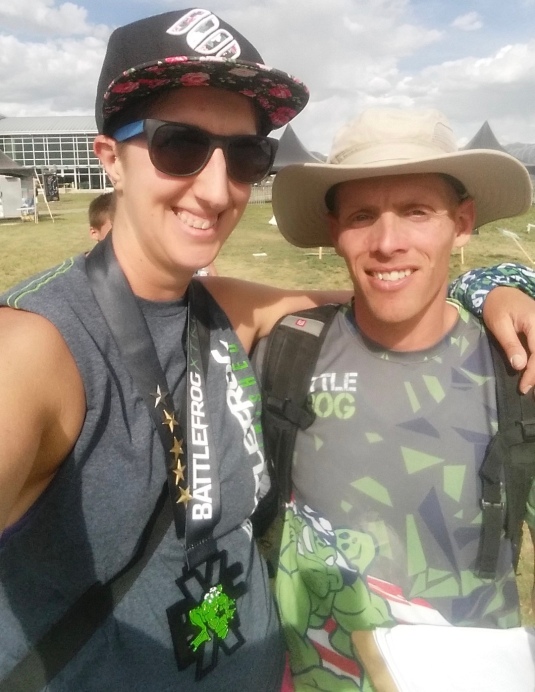 Caught up with Hobie Call after the race

The last kilometre felt like it took forever. As I trudged up and down the mounds I was happy to be almost done, but the mounds seemed to be never-ending. Finally I climbed the last wall and power walked to the finish line. I crossed the finish and Cupp handed me a medal and have me a hug. I knew I’d come second and the lack of food meant a few tears were shed. My feet were on fire so I lay on the ground for 10 minutes before I could get up and get my gear. I demolished a banana and skulled a bottle of water before getting changed. Despite being happy that I finished I was still feeling very emotional.

I earnt that silver star!

After I got changed I packed up my gear and said goodbye to the awesome crew that I had volunteered with for the last few weeks, then headed back to SLC.

I am so glad that I managed to get five laps done. It was tough with the altitude and the wind, but I pushed through the hurt and got it done. I can’t wait for the next BFX and hopefully by then I will have done enough training to improve on my time and maybe eventually get 6 laps. 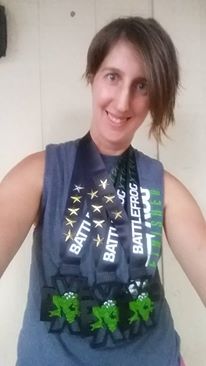