Sometimes the best way to approach a Spartan Race is with zero preparation – well that’s what I was telling myself this last weekend as I prepared to take on my first Spartan of 2018 in Picton, an hour’s drive outside of Sydney.

It was a last-minute decision to fly across the country for the race and thankfully I have a friend who lived 10 minutes from the race venue so my accommodation for the weekend was sorted. On the last day of registration, I signed up for the combo (Super/Sprint) and the Hurricane Heat. I must admit that I wasn’t feeling very enthusiastic about the race, and the reason for heading to Sydney was nothing to do with racing, so I was sceptical about whether I’d get through the three events over the weekend.

I arrived at the venue just before sunrise on the Saturday morning, ready to at least take on the Super (14km+). I’d signed up to the Elite heat to see how I would fare against others, but as soon as I saw the hills I knew I’d be in trouble. Hills are my nemesis, and when you’re not a confident runner they’re even worse! Despite this, I wanted to give it my best shot.

My idea to give it a red hot go disappeared within five minutes of starting the race. As the rest of the elites ran off into the distance, I remained with a handful of people who had already given up on running as we headed straight up some small hills towards the first few obstacles. The course then wound back down towards the festival area, only to wind straight back up again. I’ve said it before and I’ll say it again – when it comes to Spartan the rules are reversed – what goes down, must go back up, and down, and up, and down, and up (and so on).

By the fourth obstacle (a tyre pull) I was last of the Elites and spotted a guy who seemed to be in struggle town with me. We started chatting and he introduced himself as Tin, and told me that this was his first ever obstacle race. We decided to get through the course together and I was more than happy to show him the ropes when it came to Spartan.

By the time I got to Olympus (which was fairly early on) I’d given up all hopes on completing the course as an Elite as I knew there’d be far too many bupees in my path. So I removed my wristband and decided to just have fun. I made it almost to the end of the monkey bars (my favourite) before slipping off (devo). They were wet from the overnight rainfall and I was so upset that I failed them for the first time ever.

A muddy trench proved to be Tin’s first major obstacle – as the mud sucked him in and caused leg cramps. I rescued him with my trusty Vegemite and by the time it kicked in we were back to shuffling along at a glacial pace.

We faced the standard Spartan obstacles – barbed wire crawls, torsion bar crawl, balance beams, rings (which were impossible due to them being so low), and an inverted wall. That was in the ‘flat’ part of the course, as then we were taken to the hills.

After getting soaked in the dunk wall, we were led up a hill, and just as you thought you were at the top you were led just a bit further up. I wasn’t having fun anymore (I mean who does have fun when going up hills) but Tin was providing me with words of encouragement to get me through. After fetching a piece of Spartan tape, we headed back down the hill, over an 8-foot wall, then back to the bottom of the hill where we faced a heavy farmer’s carry. Then it was time for the sandbag carry.

I’m a fan of the U.S. sandbag ‘pancakes’ as they’re easier to carry than the hessian bags Australia used to have, but when you’re trying to carry 18kg (women) or 27kg (men) all the way up a stupid hill, it can get tough. Some may even say it’s soul-destroying. I joked that if the buff shirtless guys are struggling to get up the hill without stopping, then it’s ok for everyone else to stop.

View from the top. You can’t even see the bottom of the hill!

We dumped the bags after the never-ending sandbag carry and enjoyed some flat ground (albeit briefly) for the slip wall and rope climb, before heading to impossible mud mounds, a tyre drag, and then back up another hill. Have I mentioned how much I hate the Picton race site yet? (haha).

More obstacles were in our way including an atlas ball carry, Z-walls, swim, and the lovely bucket carry (everyone’s favourite).

As we weaved up and down more hills, we narrowly avoided a passive aggressive cow who was unhappy that we were standing in her preferred toilet spot, and five hours after starting we neared the end.

After a swim and a failed spear throw we were met with the latest and greatest obstacle – Fire Jump 2.0 – aka the Stick Jump. That’s what happens when you have a total fire ban in the area! Then after an impossible Hercules Hoist and a walloping from the gladiators, we were done!

I was in two minds about heading out again for the Sprint as I was feeling so drained after the Super. The relentless hills, the changing weather and my lack of preparation all played a part in my exhaustion. I had some food and water and after 10 minutes I started feeling a bit better. I found Tin and said that I’d join him in the Sprint so we planned to head out in the 1pm wave. 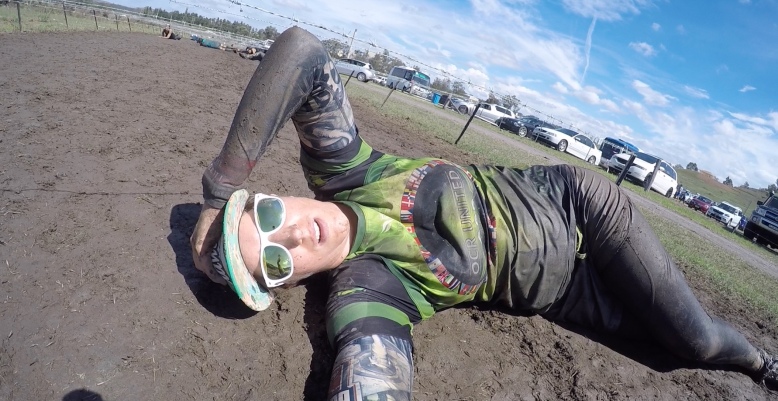 I’m just going to have a nap here… under the barbed wire.

Shortly after starting the Sprint we started chatting to someone who was clearly also in struggle town. She introduced herself as Emma and we invited her to join us in our quest to get through the Sprint. As we got to the muddy trench walk, I spotted two very clean girls who were talking about not wanting to go in the mud. This was their first ever obstacle race and they didn’t really know what to expect, and the look of dark grey mud was very off-putting. I started chatting to them and invited them to join our expanding group. Their names were Betty and Denise and I was determined to help them both get through the course.

During the muddy trench walk we came across another girl who’d been ditched by her friends. She’d also done the Super and was exhausted, so she then became the sixth member of our newly formed team. Her name was also Emma – so that made it easy to remember!

The six of us took turns to help each other through obstacles and push through the pain whilst climbing the never-ending hills. When one of us was having a tough time, there would be someone else right next to them helping them through.

Eventually the six of us crossed the finish line with huge smiles on our faces that masked the exhaustion that was felt by all. We were each handed a medal and gave each other a high-5 and a hug.

Whilst walking through the Sprint I realised what it is I love about OCR – and it’s not the obstacles. Whilst the physical aspect is certainly addictive, it’s the camaraderie and the look on people’s faces when they achieve something they didn’t think they could achieve.

It’s talking to people in their first race about what they can expect out on course.

It’s showing people ways to take on an obstacle.

It’s seeing that smile and that feeling of accomplishment when they conquer an obstacle.

Now my challenge is to be able to take that with me for every race. Whilst I love racing, I am the least competitive person on the planet, so I get much more out of helping people than I do by racing against others.

I had such a great time on course with my new friends, and I am so proud of all of their achievements!

Emma, Emma, Denise, Betty, Tin and Me – in our muddy glory!

P.S. I didn’t end up doing the Hurricane Heat. I bruised my thumb on the Saturday on course and was feeling so lethargic that I would have caused further injury had I actually done it. I’m a bit disappointed in myself, but I know there will be chances in the future to take it on.