Beijing is one of the busiest cities in the world, yet there are still some places that you can escape to for peace and quiet.

With no Facebook, Instagram, Snapchat or Google to distract you, it’s a perfect chance to strap on some walking shoes and head outside.

If you want to spend a few hours wandering around and marveling at beautiful architecture then head to the Temple of Heaven. The ancient buildings are surrounded by lush gardens with tall trees and plenty of wildlife.

The Hall of Prayer for Good Harvests

Constructed from 1406-1420, the complex was visited by the Emperors of the Ming and Qing dynasties. There were ceremonies of prayer to Heaven for good harvest, and often livestock was used in the sacrificial ceremonies. Plaques near each building teach you about the history of the area and the significance of each structure in the gardens.

The Great Wall of China, Tianjin

I visited the section of the Great Wall at Huangyaguan, just outside Jaxian. Starting at Ying and Yang Square, visitors can walk either East or West along the wall as they step back in time and marvel at the views.

Those who walk East will face over 2,500 steps in the 3km stretch between Ying and Yang Square and the road at the end of that section of wall. Just be prepared to take some huge steps along the way as some of the ‘steps’ are twice the size of a conventional step.

Tiananmen Square is in the heart of Beijing and lies just south of the Forbidden City.

The square contains the Monument to the People’s Heroes, the Great Hall of the People, the National Museum of China, and the Mausoleum of Mao Zedong.

The square is surrounded by fences and anyone entering by foot has to pass through a checkpoint to enter the square. There’s a train station nearby which makes it easy to access.

The Forbidden City was the Chinese imperial palace used from the time it was first built in 1420, until 1912. Now it’s under the control of the Palace Museum and houses over 900 different buildings in 180 acres. 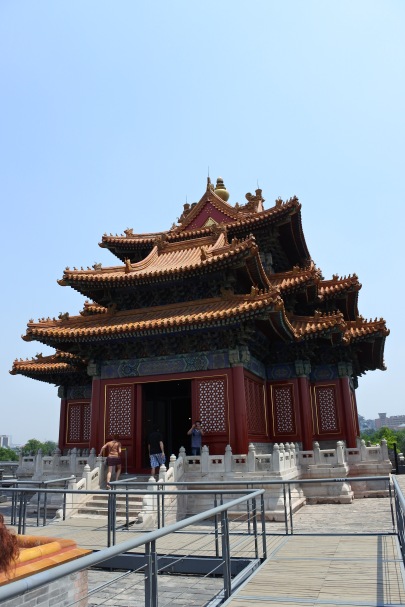 There is a lot of information available about the history of the city and its architecture. The original architects did an incredible job in ensuring these buildings withstood the test of time.

You can easily spend several hours walking around the Forbidden City and still not see all of the buildings that it houses. My suggestion is to go early in the morning on a week day. I made the mistake of going during the middle of the day on a Sunday which meant it was really hot and there were tens of thousands of other visitors.

The hardest part is trying to work out how to leave the Forbidden City. The exit leads you out to a random side street and from there you have to find your way back to Tiananmen Square and pass through another security checkpoint to get back to where you started from. From the time I decided to leave the Forbidden City, it took two hours to navigate my way out and pass through security again and leave Tiananmen Square.

I stumbled across Taoranting Park when searching on Bing maps for things to do on my last day in Beijing. I paid the 10Yuan entry free (about $2 Australian) and spent two hours walking around the gorgeous gardens.

The park is home to replicas of some of the most famous pavilions around China. Some have fantastic names like the Always Sober Alone Pavilion, the Immerse-in-Moonbeam Pavilion and the Jiang Pavilion for Enjoying the Sight of the Beautiful Fish.

It was the only place in Beijing where I heard birds chirping and couldn’t hear the sounds of people honking their car horns. There were people going for an afternoon run, others were fishing (in the lake that says no fishing), and there were groups of people singing and dancing. It’s perfect if you want to forget you’re in a big city and just enjoy nature.

One thought on “Beijing”