Once a year hundreds of people make the pilgrimage from Perth to Margaret River, descending on the green pastures of Bootleg Brewery to get down and dirty at the South West Mudfest. Now in its fourth year, the Mudfest delivered on its promise of #RealMudGuaranteed!

There’s two distances to choose from for the adults – the Dirty Dozen (12km) and the Mud Mayhem (5km), and a short 1km kids course for those who just want to get dirty! 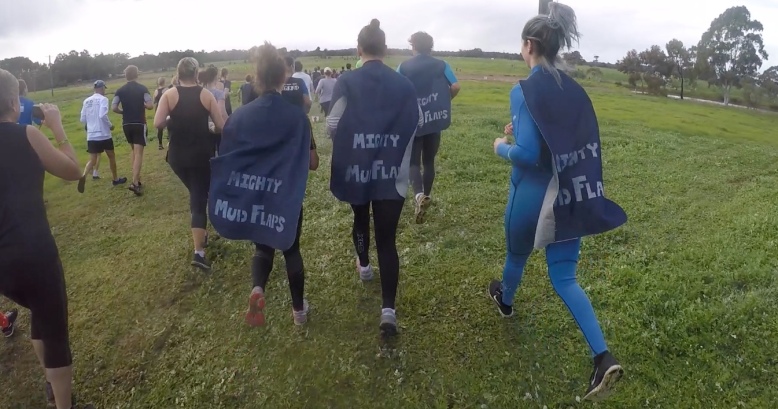 The drive from Perth to Margaret River is just under three hours. I wasn’t going to drive that far to only run 12km, so I signed up for both the Dirty Dozen and the Mud Mayhem and prepared for a busy Saturday.

The morning was dark and gloomy as the rain clouds hovered overhead. People remained close to the heaters in an attempt to stay warm, rather than face the 10-degree weather that awaited them outside the tents. As we headed to the start chute the brutal South West winds picked up and we all shivered whilst trying to get warmed up.

At 9am the ‘ribbon’ was dropped and we were off. As two Spartan Racers (Adrian and Shannon) sprinted off into the distance in a battle for first place, I ran alongside two friends at the front of the pack to the first obstacle – a cargo net climb.

A huge line quickly formed behind us as only two people could climb at one time. Eventually I was up and over and my friend Michael commented that Emma and I were second and third (for the ladies), and if we ran a tiny bit faster we could overtake the leading lady and take first and second place. Most people would have been excited at the prospect of winning, but I was hesitant and has a mild moment of panic as I realised I’d have to actually push myself.

I ran behind Michael and Emma and as we caught the few people in front of us I had the first of many moments of self-sabotage. I got caught in a cargo net and used it as an excuse to then run slower and let Michael and Emma get ahead of me and run off into the distance. I spent the next 30 minutes having an existential crisis in my own mind (but you really don’t want to hear about that right now) and forced myself to focus on the obstacles in my way instead of those in my mind.

That water was COLD!

The course took a few turns as we played jenga, slid head first down a waterslide (aka a black tarp with a fire hose full of water), crawled through mud and climbed over hay bales.

The organisers didn’t think that mud was smelly enough, so halfway through the Dirty Dozen we were all subjected to stepping in foul-smelling feed (made from barley) that resulted in us smelling like livestock for some time. 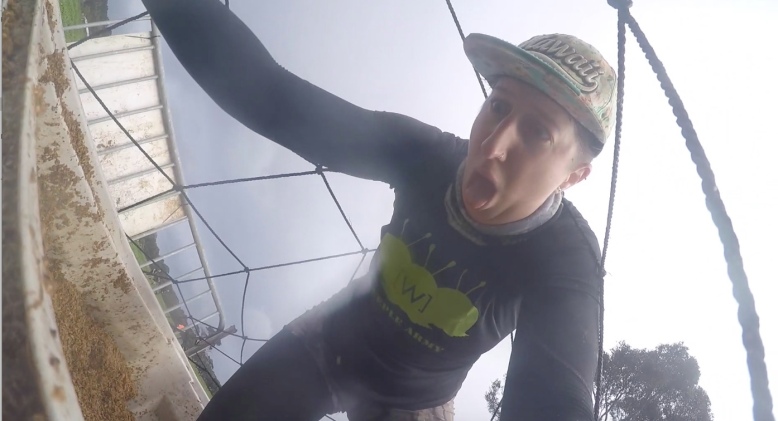 My face says it all…

Those of us on the Dirty Dozen course headed into the trees to tackle nature’s obstacles (such as epic logs to jump over) as well as some fun ones that involved climbing over cars and high walls. We were then led to the dam and attempted to run along a muddy inflatable before plunging into freezing cold water.

Luckily the rain was still at bay, but every time the icy wind blew I had to shiver and keep running to stay warm. As I appreciated the return to the woods I was struck in the face by a water balloon filled with flour resulting in a murky eye and me almost running into a tree.

The final obstacles included an inflatable called Everest which involved climbing up the slippery side and then sliding down the other side into the ice-cold water (once again). The lack of rain was obvious as I ran along an embankment, when two years ago, I was wading in waist-deep water in the exact same spot.

With another crawl and another climb I crossed the finish line and enjoyed my free burger and cider by the heater before getting changed back into my muddy clothes and heading out a second time with some friends.

The Muddy Mayhem was a lot more fun. The sun was shining through the clouds and despite the midday rainfall the weather was starting to warm up. The mud had turned thick and sloppy thanks to the Dirty Dozen participants and the extra rain. One kid lost a shoe shortly after starting and another participant was running barefoot to avoid the risk of losing one or both shoes in the mud.

After another 5km of running I was spent. I’d ran for most of the courses (an epic feat for me) and despite the lack of hills my legs were feeling heavy. After showering in the dribble of warm water I put on clean clothes and said goodbye to my friends before getting in the car and enjoying the three-hour drive home.

The organisers of the South West Mudfest put on great events in the past and this year was no exception. While the course was the same as it’s been since it started in 2014, it’s challenging for some but fun for all.