I was in Dallas for the Spartan Race weekend and ready to take on the Beast and Sprint like I did in 2016. The plan was to walk the Beast on the Saturday with one friend, then do the Sprint in costume with another on the Sunday.

For the uninitiated, the Ultra Beast (UB) is two laps of the Beast course. A Beast is at least a half-marathon in distance, with some having been measured as being over 28km/17 miles in length. With at least 60 obstacles to tackle, it’s not for the faint hearted.

On the Sunday before the race, I was preparing for the weekend when several friends suggested I try the UB instead of just the Beast. So, after a quick post on the Lone Star Spartan page, I was signed up for the UB and had five days to prepare.

I did my one and only UB in Melbourne in 2015 and completed the course in just over 9 hours. I figured that as Dallas was a flatter course I’d be able to match or at least beat my time. My main goal was to finish before sundown, meaning that I’d have just over 12 hours to complete the course after starting at 6:30am.

The Thursday before the race was a warm 28 degrees Celsius, much like the weather at 2016’s Spartan Weekend. But being Texas, the weather changed overnight. On the morning of the race it was -2.2oC (28oF) when we left the house at 4:30am, and wasn’t that much warmer when we arrived at Rough Creek Lodge.

I’d decided to test out my wetsuit before World’s Toughest Mudder, and wore it on top of my compression gear before the race. I also had a $5 Walmart beanie to keep my head warm and my cheap gardening gloves that have got me through many previous races. At 6:30am I waited with my fellow Spartans as the last of us UB racers took to the course.

The only way to see the course was by head torch as the sun wasn’t due to rise for another hour. The crowd was dispersed after the first few obstacles which consisted of hurdles, over walls, over-under-through, 6’ wall and an inverted wall… Did someone mention walls? I think the theme of the start of the race was walls…

I had no strategy of how to conquer the course, so I tried to run on the good ground and walked on the pitted ground. 30 minutes into the race I was already busting for the toilet, so I disappeared into some bushes and briefly froze as I removed my wetsuit to pee.

As I approached the Bender I knew I’d be needing some assistance. After falling off an inverted wall in Temecula in 2015 I’ve been wary of inverted walls/bar climbs and this was no exception. I had a fellow Spartan help me up and over before singing ‘Circle of Life’ in my head as the sun started rising over the horizon.

The sandbag carry was next and as I headed down the hill I noticed the first few elite men starting their run up. I let the past and started weaving up and down the hills before taking my time in the barbed wire crawl. No matter what I do – I always seem to move at a snail’s pace through the barbed wire. Rolling makes me dizzy and crawling seems to get me nowhere quickly. One day I’m sure I’ll get the hang of it.

The Ultra Beasters were led off for an additional loop that included a memory test, hay bales and slosh pipe flips. We met up with the Beast runners for more weaving up and down hills, and more walls (8’ wall and the Stairway to Sparta). Then the real fun began. Normally Spartan Race has a dunk wall at the end of the course. So just when you think you’re nice and dry, they make you submerge yourself in muddy water and then jump over a fire. This time they changed things up and put the dunk wall after the rolling mud pits – meaning we had to submerge ourselves in freezing cold water, early in the morning. In that moment, I was so grateful to be wearing a wetsuit as I would’ve frozen if I’d only had compression gear on!

My legs were so cold that I could barely run, so I power walked and tried to avoid twisting an ankle in the pitted ground. As I approached the Tyrolean (rope) Traverse I started chatting to a lady who’d been playing tag team with me for the prior 20 minutes. We decided to stick together as we were walking at about the same pace. After an atlas carry the Beast runners were directed to more freezing water (aka the ‘ball shrinker’) whilst the UB runners got to go around.

We completed the Z Walls ‘Weeple Style’ before continuing on a long loop towards the plate drag and my favourite – the monkey bars. I love the monkey bars at US Spartan Races as they’re thick, meaning I can hold on without tearing my hands to shreds. After the Monkey Bars was an obstacle called Olympus. It was a slanted wall with chains, holes and grips to hold on to. The aim was to go sideways with your feet or knees on the wall and reach the bell on the far end. Spartan put a spin on things for Olympus – as the penalty for failing the obstacle wasn’t 30 burpees, but a 400m penalty loop.

We climbed over the A-Frame cargo net before completing another sandbag carry. By this stage the idea of running had almost disappeared from our minds as we ‘walked with purpose’, wanting to get the rest of our first lap out of the way. We crossed through last year’s ‘fish river’ (with no dead fish this time) and I was thankful (again) that I had my wetsuit on, although my calves were loving the cold water.

At the multi-rig I got caught on a nun chuck and dropped off. I was mad as I was so close to the end, so I swore that I’d think of a better technique for the second lap. After the multi-rig was a nice and easy Bucket Brigade as we walked an easy loop down and up the side of a small hill.

The end of lap 1 was in sight, and all we had to do was get through the Atlas Lift, Twister (fail), Vertical Cargo and memory test (Mike – 025-5877) before refuelling in the pit area. Thirty minutes, two Quest bars and one toilet stop later, we were ready for lap number two.

Lap number two was a lot more mellow as our legs were already sore and my hands were still numb from the cold. There were a lot more pauses to run into nearby bushes, but also a lot more laughs. The sun had come out and the weather was warming up, meaning I could get away with having the top of my wetsuit around my waist. The water was cool but refreshing and there were a lot of fresh-faced Beast runners on course to help us over the giant walls.

I’d given up on the running and focussed on having fun with Kim and nailing the obstacles. The spear throw was a failure (again), but I made it through the multi-rig on the second lap and did a little victory dance at the end.

After the vertical cargo came another barbed wire crawl (ugh), a slip wall that wasn’t slippery, and the Hercules hoist. The sun was starting to disappear as we were finishing and the temperature dropped significantly in the last 15 minutes that we were out on course. We just wanted to finish to get warm and eat some food! 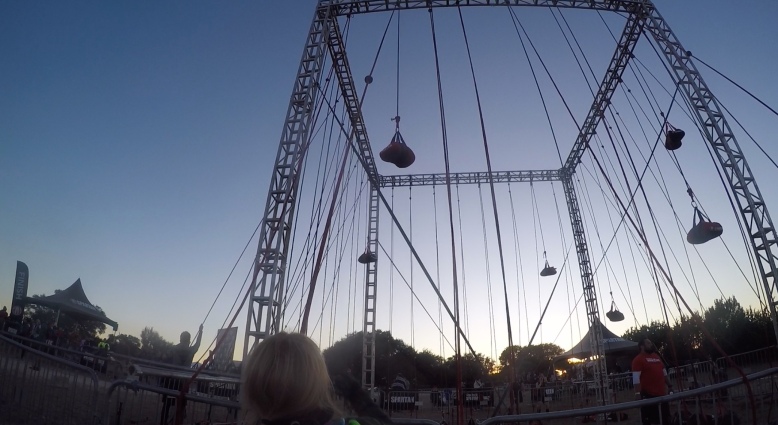 We jumped over the fire and crossed the finish line together. My official time was 11 hours and 55 minutes – 3 hours slower than my last UB. I’m not sure how I managed to move at such a snail’s pace on such a flat course, but I’m at least glad that I finished before sundown.

Kim and I picked up our huge belt buckles and celebrated with a banana and a quick hug before I put on my dryrobe and headed out with friends for a much needed meal.

My performance during the race certainly wasn’t anywhere where it could have been. My running was almost non-existent and I had no desire to push myself on the runs. I was determined to get as many obstacles as possible which resulted in getting the multi-rig for the first time ever in a Spartan Race.

The last-minute decision to do the Ultra instead of just the Beast probably didn’t help as I’d been planning on walking the Beast at a leisurely pace anyway. I’m grateful to have met someone awesome out on course who was running and walking at the same pace as me as it meant I had someone to chat to and keep me entertained during the many hours that I was out there.

I left this race with the confirmation that I am better than I believe – and my completing the multi-rig proved it. It was a simple rig compared to other races, but the fact that I didn’t give up until my grip gave way is testament to the fact that I’m listening to my own advice and willing to push myself that little bit further.

While I don’t know when or where my next UB will be – I do know that I want to beat my old time of 9 hours!

Sunday was an active recovery day as I joined my friend Kristen in walking the Sprint course. We dressed as Steve and Terri Irwin, and I even had a mini inflatable crocodile with me for the day 😀 Although everyone on course seemed to think that it was a Dinosaur…

The course started with a wall, another wall, and another wall, before skipping the dunk wall (yay) and heading straight for the fun obstacles. My baby croc completed all the obstacles (apart from the spear throw) – even the monkey bars and the multi-rig!

The rig was set up with ring which made it easy enough to get across, and the bucket carry involved me shoving my croc in the bucket and carrying it around the loop. My back was in pain after the second carry on the UB so I wasn’t going to carry another load of rocks around.

The croc was hoisted high into the air for the hercules hoist, before joining us over the fire and through the finish.

I’d been thinking that the Sprint would take about 2 hours and when I checked my time I was impressed with my guess as it took me 2 hours and 18 seconds!

The cold water was great for my tired legs and I felt a lot less sore after the Sprint. It was good to get the blood pumping again after a long day on the Saturday.

The weekend was challenging but so much fun. I am glad I tackled the Ultra Beast and got the chance to muck around on the Sprint. It was also good to see some of my Texan friends again J I can’t wait until next year’s race – although I will have to find myself a new Aussie costume 😛