My week started with the most incredible DOMS I have ever experienced! My calves felt like rocks and were so sore, even going down one step was painful.

My lower back was in pain after the SISU Iron, no thanks to the 14 mile hike with a log in my ruck. I managed to get my washing done and tried to avoid walking down the stairs at Kevin and Joe’s house too many times. It was Laura’s last night in LA so Kevin, Joe, Laura, Don and I all headed out to dinner at Sharky’s Mexican. I’d finally found golden syrup at Wholefoods so I spent the night making Anzac biscuits. They proved a hit as by the next morning there were barely any left.

I decided to spend quality time writing my recap on the SISU Iron, so my Tuesday was dedicated to that. Almost six hours of writing went into it so I was glad to receive some positive feedback. I managed to Skype to my Mum and brother and briefly introduced them to Joe.

Wednesday was celebration day, so I headed out to Universal Studios. I’d bought my ticket online the night before so I was allowed into the park at 8am, one hour before the usual opening time of 9am. There was a small crowd outside the gate with me, but I was officially the first person into the park for the day. I made a beeline to the Harry Potter part (the only section that was open) and ended up being the first on the Harry Potter ride for the day. I loved it so much I went on it another two times in a row before feeling dizzy. I spent the rest of the hour roaming around Hogsmeade before the official opening time of 9am. 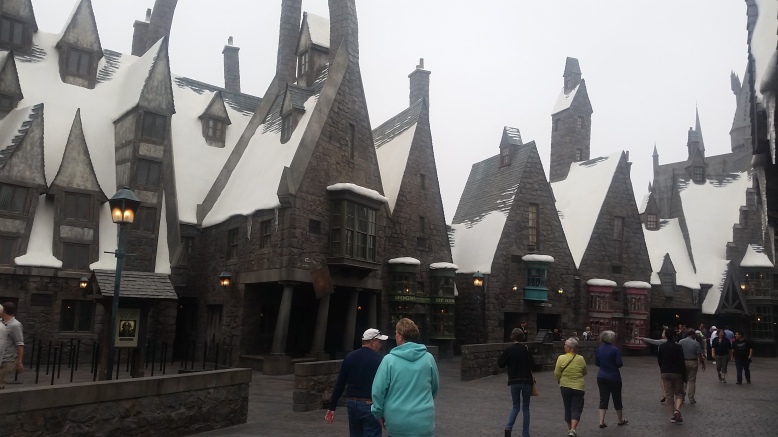 As the park opens at 9am there weren’t many people around, so I took advantage of that and headed to The Simpson’s ride first off, before doing the Studio Tour. This was my third time at Universal Studios, the first being 20 years ago. It’s good to see that some things have been updated and the studio tour is a lot better than I remember. Next I headed down to the lower lot and spent time on the Jurassic Park, The Mummy and Transformers rides before heading back to Hogsmeade for lunch.

The longest line I had to wait in all day was to be seated for lunch. I went to the Three Broomsticks restaurant and enjoyed bangers and mash with a cold butterbeer. I don’t know what the butterbeer is made of but it tasted amazing. I could have just spent all day sitting under the heater and drinking it.

I wanted to make the most of my day so I headed to the Special Effects show before grabbing another Butterbeer and heading to the Waterworld show. Before leaving I went on the Minions ride and the Flight of the Hippogriff before being picked up and heading back to Joe’s. That night, Kevin, Joe and I went to Garlo’s Aussie Pie Shop for some amazing pies and Tim Tams.

Thursday was time for me to pack up and say bye to LA again. I managed to sneak in one last trip to In-N-Out for lunch before Kevin dropped me at the bus station and we said goodbye. I was off to catch the train to Flagstaff to do the Grand Canyon Half Marathon on the Saturday. The train took about 10 hours and was more comfortable than being on a plane. I had so much leg room and was able to stretch out and curl up to sleep. At 4:30am I arrived in Flagstaff and walked the hundred metres to my hostel before finding my bed and sleeping for longer.

On Friday I picked up my rental car and headed to Tusayan to collect my bib and other goodies for the half marathon. I was surprised to see snow on the mountains just outside of Flagstaff and learnt that the town is at an elevation of about 7000 feet. I drove back via the scenic route which goes past the San Francisco Peaks.

Saturday was race day, and you can read about the event here.

After the half marathon I grabbed a quick bite to eat before driving up into the Grand Canyon National Park. The weather was all over the place. One minute it was sunny and there was blue sky, and then 15 minutes later it would start to hail. I parked the car and decided that a nap was in order as I was exhausted from my 4am wake up. I had a 20 minute power nap in the car and woke up feeling refreshed. I grabbed multiple layers of clothing and headed to the Visitor’s Centre briefly before venturing to the rim of the Canyon.

Amazing would be best word to describe the view. The canyon stretched on for as far as the eye could see and I was blown away by just how deep the canyon actually is. Photos really don’t do it justice. I spent the next two hours meandering along the path between the Visitor’s Centre and the Village, stopping to take photos and just stare in awe at what mother nature has created. Luckily the rain stopped during the time I was there and the sun even poked out for a few moments. But just as I would get warm and think the sun was going to stay visible, the wind would blow freezing air and I’d have to put all my layers back on.

After walking for two hours I jumped in the car and headed to the Desert View Watchtower. It was getting late and the temperature had dropped significantly so after 10 minutes I was back in the car and headed down to Lipan Point to try and watch the sunset. I enjoyed my picnic dinner consisting of a salad and bagel with peanut butter before braving the cold to take some more photos of the canyon. The clouds made the sunset a bit uneventful, but I still managed to get some great shots.

The drive back to the hostel took almost two hours. Unfortunately there had been an accident which meant we were stopped for just over 20 minutes while the emergency services cleared the road for us to pass. After getting back onto the main highway I was stuck behind a driver going 45mp/h in a 65 zone, causing a huge backlog of cars. It wasn’t safe to pass so we all had to drive 20mp/h under the speed limit for about 30 miles, until the driver turned off. I was frustrated to say the least, but I just cranked up the Hottest 100 and sang along to the music to get me through.

The weather on Sunday was cold and rainy, so I headed for a brief stroll around Buffalo Park before returning the rental car and relaxing at the hostel. I played catch up on my writing and reading and just enjoyed the warmth inside.