In an attempt to get another medal for my wall I joined my friend Hayley, and her friend Le, in a relay team for the Perth Marathon.

I was home for three weeks and was keen to do something during my break but the prospect of running a full marathon seemed way too daunting. After posting about the event on Facebook Hayley got in contact with me and after a few hours of deliberating we’d signed up to be in a team of 3. Le was going to run the first two legs, I would have leg 3 (10km), which left leg 4 for Hayley.

We met up on the Sunday morning and hoped the prediction of rain was inaccurate. Luckily the weather gods were on our side as the clouds disappeared and just left us with a cool breeze.

Le took off running as Hayley and I meandered down to our starting points on the South Perth foreshore. I’d taken two weeks off running so I was a bit sceptical as to how I’d perform but I was keen to get underway. I decided intervals would be the way to go so I set my watch for 2 minutes of running and 1 minute of walking. 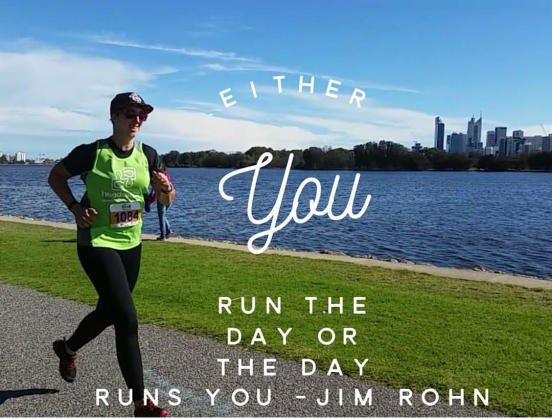 Before long it was my turn and I quickly settled into a good pace as I ran back towards Burswood. After the first 3km I got into a good rhythm and focussed on my breathing during each running interval. At the 7km mark I was surprised at how well I was doing that I tried to push myself to run faster but unfortunately it backfired. I slowed my pace and swapped my intervals to run 1 minute and walk 2 minutes and an hour and fifteen minutes after starting I crossed the line and tagged Hayley to start her leg.

As Le and I walked back to Burswood I reflected on my run and was pretty happy with my time. I’d never done a 10km time trial before and I had no idea what to expect after a two-week break.

We all ran across the finish line together and got to pose with a medal before handing them back. The relay teams didn’t get a medal which was disappointing but we had an awesome morning so it was still worth it.