August means one thing to a lot of Spartan Racers – Hawaii Trifecta Weekend!

I joined thousands of other Spartans on Oahu for what was going to be a great weekend of racing and friendship. The weather in the week leading up to the race had been sketchy at times, but the rain meant it was cooler and less humid than last year’s race which was a bonus.

I wasn’t due to start until after 7:30am so I watched the sunrise from the ranch before heading to the start chute to wish some of my friends good luck in the Ultra Beast. I’d said hello to Dustin and was scanning the crowd when I saw someone running towards me. Before I could see who it was they launched themselves at me and latched their legs around my middle as I stood there confused. It took me a second to realise that the person I was now holding was Beverly, aka Psycho, who I’d met the previous night.

Last year I had planned to run the Beast with Haruko (aka the Mudcrusher) but due to being mutually disorganised I had to go out on course without her. This year we planned to meet up early and head out for the Beast together.

I’d been waiting near the waiver tent for Haruko to complete her mile-long walk from the car park to the ranch when I finally saw her. She was looking down at her phone when I approached which meant I inadvertently scared her when I said hello. We laughed and hugged and went off to get her registered for the Beast.

Laura, me and Haruko

There was no rush for us to get out on course so we took our time to get ready before heading to the start chute. As Dustin yelled out “Go” we started walking, stopping almost immediately to watch the people playing drums at the start line. We joked about how slow we would go after we’d already lost sight of the others runners who started with us.

The first part of the course was almost identical to last year’s race. We started with the creek walk and a few walls before heading up the first of many hills. I spotted some Weeples along the way so we stopped for photos before making our way to the memory test (X-Ray 099-2898).

We walked back down the hill and passed some cows that were casually grazing nearby. After a few random log hops, a few more hills, and a wall, we made it to the barbed wire crawl and were advised that we couldn’t leave our hydration packs by the side, but had to take them through the crawl with us. Soon enough there were hydration packs flying through the air as their owners threw them ahead to prevent them from having to drag them along.

Excitement was in the air as we finished the crawl and realised how close we were to the tree used in Jurassic Park when Dr Grant and the children are hiding from the stampede. We all stopped and took photos with the sign before heading on to the inverted wall and ladder wall and up yet another hill.

It was then time for the bucket carry. As Haruko and I walked back down the hill with our buckets I could just hear someone calling out “Hey Mudcrusher!” We waited at the bottom of the hill for the lady to finish her bucket carry. She came over and introduced herself as Kristy and we took a photo before continuing on.

We were having fun in the sun when the clouds rolled in and it started pouring down with rain. The rain didn’t last long but the short showers were enough to make some epic mud. We climbed over another wall and rounded the corner to the Beast turn off point – up the same muddy hill that we trekked last year.

Due to our late start time there weren’t many people on the hill which meant we got to the summit in under an hour and a half (which is what it took me last year!). The mud was slippery but my Icebugs were up to the challenge as I dug my feet in and made it to the top without sliding anywhere. Other people were running in flat-soled shoes and they looked like they were trying to do the moonwalk up the hill as their feet would slide all over the place.

As we went up and down the huge muddy hill the rain would start again for a few minutes at a time and then stop. There were some sections where we had to slide down on our bums as it was too steep and slippery to try and walk down, so we just had fun with it. In one section a girl came sliding down the hill so fast that she crashed into me (and you can see her doing so in my race video).

Every time the clouds disappeared we’d stop and admire the incredible view from our high vantage points. I think the Hawaii Spartan Races are the most picturesque and definitely some of the most fun that I’ve done.

A few hours in and we were still smiling as we walked through more mud, took more photos and videos, walked through many creeks, and did a few more obstacles. There were a few pit stops where we sat and munched on protein bars and others where I stopped to say hello and hug friends. 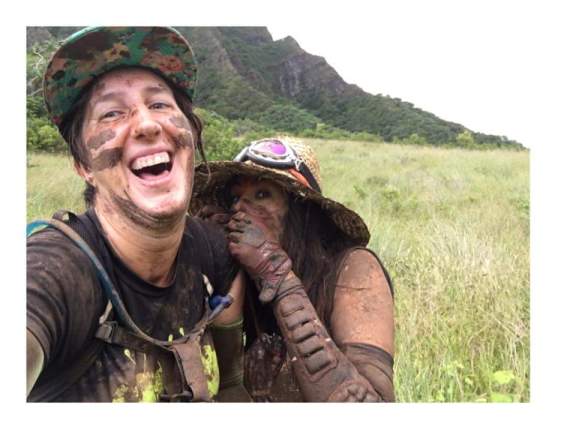 There was one point where Haruko and I stopped to have a food break and ended up sitting for 10 minutes just laughing at ourselves. We laughed at people failing to get up another muddy hill and laughed at the amount of time we’d already been on course. After composing ourselves we carried on trekking through more mud and up and down more hills. 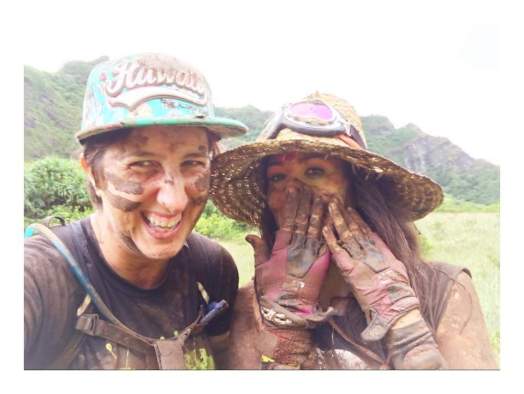 “Yes Haruko, you have mud on your face!”

Eventually we got off the Beast loop and were back on the Super course when I saw more friends including one of my housemates, Ricky. Thanks to the mud on Haruko’s face he commented that her teeth looked extremely white and thus nicknamed her Colgate. We walked together for a bit before Ricky and his friends ran off as they just wanted to complete the Ultra Beast. Haruko and I walked on and when I looked at my watch I realised we’d already been on course for 8 hours and still had about 6km to go. 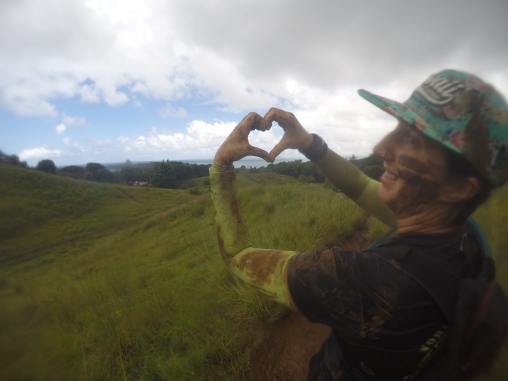 As we zig-zagged along the course our pace slowed thanks to a severe case of the giggles. There had been a lot of walking and not many obstacles so we were both in need of something to distract us from all the walking we still had to do. Finally we turned a corner and hit all the major obstacles – atlas carry, multi-rig, rope traverse, Z wall, sandbag carry, spear throw and rope climb.

After many burpees and some completed obstacles we rounded the final corner to the Hercules hoist, monkey bars, slip wall and fire jump! We crossed the finish line 10 hours after starting and were both exhausted. It may have been my longest Beast ever but it was probably the most fun one too.

I woke up on Sunday morning feeling a bit tired and sore but ready for a second day of racing.

I’d met Krissy and Steve at the airport in Melbourne and we decided to take on the Super and Sprint together on the Sunday. We headed out early and just took our time along the course. The Super course was the same as the Beast, without the extra loop, so we all knew what to expect on the course.

What we weren’t expecting was a very smelly obstacle – the cow poo that was scattered across the course. The cows had been on the course that morning and had left the runners some additional things for us to avoid.

As we walked along early in the course I saw Laura Messner run past me as she was running the Elite Sprint. I cheered her on as she flew over the 7’ wall and down to the barbed wire crawl. She went on to place second in the Sprint which was a great achievement.

Most of the Super was spent just meandering along in our trio and saying hello to various friends along the way. At the Hercules hoist I saw Psycho (who was on the verge of losing her voice) and I almost got the monkey bars before slipping three rungs before the bell. When we finished we had a break for some food before getting ready to head out for the Sprint. 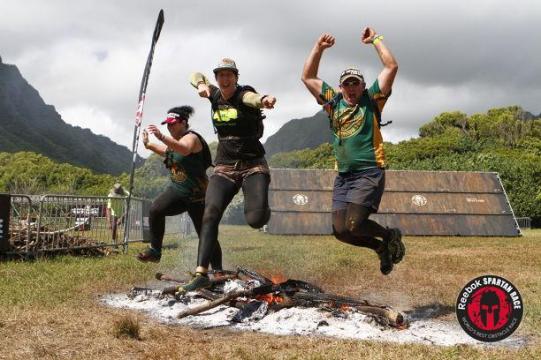 Before the Sprint I gave Dustin a Psycho hug and some other racers wanted to do the same. As one girl was getting ready to try it herself Dustin ripped off his pants to reveal some short cargo shorts. The girl had no idea how to react as she was so surprised so she just stood there and stared awkwardly as we all laughed.

The three of us took off for the Sprint and as we waded through the creek for a third time there was a cow drinking from the creek. The herd had moved over the previous few hours and were now right next to the Spartan course. We all avoided getting too close and found that the cows would move away from us as we walked by.

As we got to the 7’ wall I heard “Hey Aussie” from behind me and I saw Tim (dressed in a Superman shirt) running towards me. He helped me over the wall before attempting it himself. He managed to get over but then tripped and rolled straight into my feet with me laughing and filming the whole thing.

Tim joined Krissy, Steve and I and together the four of us continued on the course, avoiding the cow poo as we jogged along. We climbed up more walls and did the bucket carry for a third time before taking a shortcut through the bushes and making our way to the onslaught of obstacles once more.

As we got to the Hercules hoist I saw Lisa so she joined us for the final few obstacles. Tim helped us both through the monkey bars and the five of us climbed the slip wall and made sure to Strike a Messner before heading down and jumping over the fire. 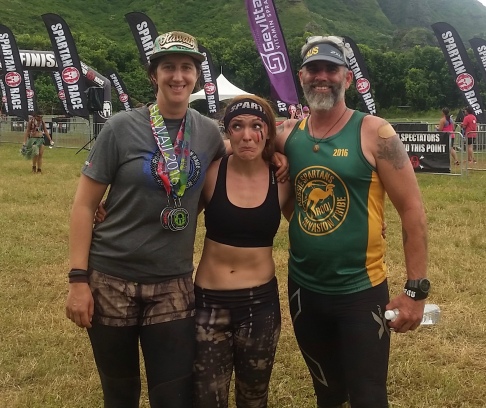 After more hugs and photos it was time to have a proper lunch and say goodbye to friends before going back to the house. Instead of showering at the venue I drove back in my muddy clothes and threw myself in the ocean to rinse all the mud off.

The Trifecta Weekend didn’t disappoint and I’m so glad that I managed to get to do the courses with some amazing friends!