My first ever Tough Mudder was in September 2013. My best friend Gina was flying up to Melbourne for it and encouraged me and my other best friend Vanessa to head along for it. I had an absolute blast despite the cold and it was one of the toughest physical challenges I’d ever faced as an adult. 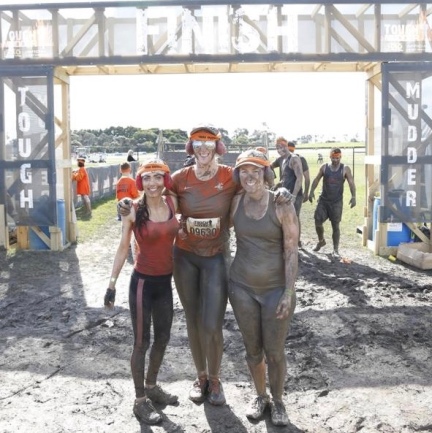 My first ever Tough Mudder

Fast forward three years and you’ll find me in July 2016, sitting alone in a backpackers in New Zealand, trying to piece together a race calendar for October. I had a weekend free between OCRWC in Canada and Spartan Race in Dallas and was hoping to fill it with a challenging but fun event which is when I saw Tough Mudder pop up on my news feed.

After my first Tough Mudder I ran a further six in the space of 15 months, but then took a two-year break from Tough Mudder as no races fit into my new schedule. But finally I had a chance to run three laps back-to-back and earn my black Legionnaire’s headband.

For those who aren’t familiar with Tough Mudder, you earn an orange headband at the completion of each race. In 2014 the Tough Mudder Legion was born and gave people the chance to earn different coloured headbands based on the amount of times they’d run the course. In December 2014 I earned my pink headband (7-9 Tough Mudders) so my black headband was long overdue.

My plan was simple: run two laps of the course on Saturday and one lap on Sunday. So on Saturday morning I joined a fellow Lone Star Spartan (Adam) and his friends for my first lap of the weekend. The sun had just risen as we arrived at the event site (a residential estate) but the music was pumping and I was ready to go!

I joined 500 others in the warm-up zone as we followed Coach’s lead and jumped around to get warmed before heading into the start corral. Emcee Sean had us all take a knee as he told us about some inspiring people including a Tough Mudder Legionnaire who’d been diagnosed with cancer. This Legionnaire decided to start living his life by one quote:

It really got me thinking about why I was there. Initially it was to earn my black headband, but it was also to test myself on new obstacles that would be challenging. It also made me think about the people that I hope to inspire through my journey. I do these events because they make me feel accomplished and make me push myself to my limits, but ultimately I do them because I want to inspire others to step outside their comfort zone and try something new that they never would have ordinarily done. After some serious talk Sean got us pumped and ready to head out. There was a lack of Tough Mudder pledge on the Saturday but thankfully it was included in Sunday’s pre-race chat.

On the Saturday morning I ran alongside Adam and his friends, on Saturday afternoon I headed out alone after missing my friend Carlos, and on Sunday I ran again with Adam his friend Sean, and the Merrell rep Alyssa who we’d met earlier that morning.

After getting pumped up we took off running along the shores of Lake Viridian and it was a mile before we hit the first obstacle – inverted wall. I still have a fear of inverted walls after falling off one in January 2015 and winding myself so I often ask for help. The comradery was already starting to show as we all helped our fellow Mudders get over the wall and headed towards a cargo net crawl (Devil’s Beard). Twice I stabbed myself in the hand with a safety pin (they’re not very safe once they’ve been ripped off someone’s shirt) but I washed it off with muddy water in the Kiss of Mud. 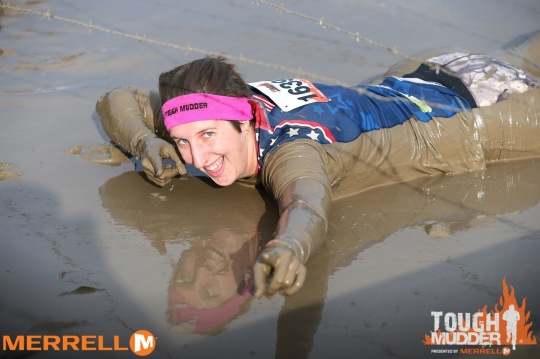 Striking a Messner in the mud!

The difference in the course between Saturday morning and Sunday morning was noticeable. On Saturday morning the Kiss of Mud was just brown water, but by Sunday it was thick and sloppy mud which stuck to us like glue. It made the Berlin Walls very interesting as we all tried to climb over the 9’ walls covered head to toe in mud.

As I got to the Hero Carry on Saturday I was alone and befriended a guy who was also alone as we took turns carrying each other down the path. On Sunday Alyssa and I teamed up and carried each other.

One of my favourite obstacles at Tough Mudder is the Mud Mile. Seven mounds of mud stood in our way so we all took turns in pushing and pulling people up the mounds and came out the other side looking a bit worse for wear.

Teamwork was definitely needed at the next obstacle – the Blockness Monster (great play on words). We all jumped into the waist-deep water and took turns holding onto the side of a rotating square shaped tube. As one person went over they had to pull from the other side as others pushed from the starting side. Volunteers cheered us on and gave us tips on how to complete the obstacle. 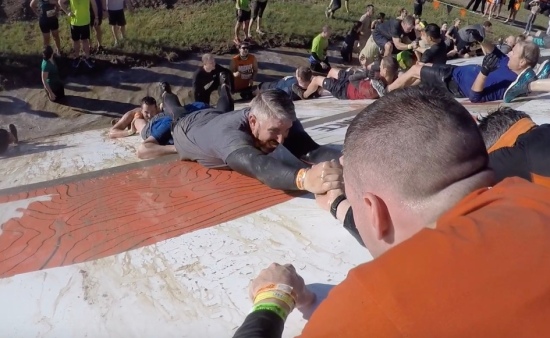 We all cleaned off with the Underwater Tunnels which just involved swimming under floating barrels, before running along the path towards Pyramid Scheme. Now this is where teamwork and comradery were really put to the test. We had to build human ladders and then climb up said chain to get to the top of the extremely slippery wall. On Saturday afternoon I witnessed several ladders collapse as people went sliding down the wall and into the water below. In addition to the human ladders we had human chains at the top where we held onto people’s legs as they helped pull others up the wall. It was a great obstacle and really got the heart pumping as we climbed and dragged people up!

The end of Shawshank

Shawshank was the first obstacle that had me a bit worried. After crawling through mud and under barbed wire we had to pull ourselves up a tilted tube before dropping into the water below. I was far too chicken to drop head first so I managed to rotate myself in the tube and drop feet first.

Birth Canal was a crawl (on rocks) underneath water that was held in plastic sheets, and was followed by Tough Mudder’s signature obstacle – Everest. It may not be a giant ramp wall but it certainly is a tough one when your feet are wet and covered in mud.

As the Tough Mudder course veered to the left the Tough Mudder Half folks went to the right to be electrocuted during Electroshock Therapy. I like to describe it as the feeling you get when you’re shocked by a metal can in the supermarket, but worse.

King of Swingers was up next and on the Saturday I chickened out both laps. It involves standing on a 3m high platform, jumping to a bar, and swinging out to a bell before landing in the water below. On Saturday I was not ready to stand there for several minutes before deciding to jump so I skipped it. On Sunday I hesitated briefly before jumping but then forgot to let go as I neared the bell. I then swung back to the platform and on my second swing out I let go and fell into the water below. It was so much fun that I was internally kicking myself for not having done it the previous day.

The course took us past new housing developments and into vacant land before giving us all the shivers at Arctic Enema 2.0. Sliding into freezing cold water was a great shock to the system, especially on Sunday as it helped relieve my sore muscles. 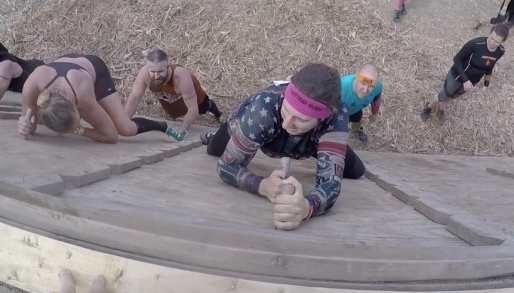 Legionnaires were presented with a different obstacle to first time Mudders at Backstabber. After getting a boost at the start each time I climbed the peg board and heaved myself over the top of the wall ever so gracefully (I looked and sounded a bit like a baby seal) before helping the Mudders below. I sustained my only injury on my first lap on Saturday after splitting my nail whilst on the log carry and by Sunday I joked about just carrying a twig instead of a log.

We headed up and over a huge ladder wall before going into some bush areas and doing some trail running which was a welcome relief from all the pavement. It was time to head up and over yet another wall before stopping for water and then waking through a muddy section of a dried up lake. At Pitfall I watched as first-time Mudders fell into the hidden holes and disappear briefly in the muddy water.

Rainman was a Legionnaire’s version of another obstacle where we dragged ourselves along in shallow water and had muddy water sprayed on our faces. It was then back to teamwork as we helped each other up a slant wall at Mineshafted, before heading back to the houses and pavement for some hay bale climbs. 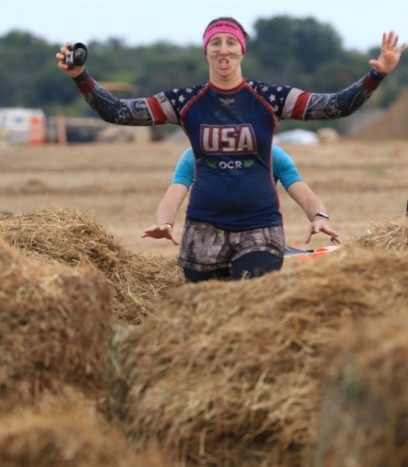 The second-last obstacle was Funky Monkey 2.0 – Tough Mudder’s take on monkey bars. I fell three out of three times as I attempted to traverse the monkey bars, swinging bar and long pipe. Like every other time, I looked down which resulted in me falling. I’ve really got to learn not to look down!

Before the final obstacle we were all given our new Legionnaire headbands. On Saturday I earned two more pink headbands (7-9 events) and on Sunday I earned the coveted black headband!

Legionnaires had one last obstacle – Frequent Flyers Club. It was yet another jump off a platform, but this time you landed on an inflatable pillow below. I hesitated for a full minute before jumping and landing with a huge grin on my face. Each time I crossed that finish line I was smiling and thinking about the amazing time that I’d had out on course with my fellow Mudders.

The difference between Tough Mudder (mud run) and a Spartan Race (OCR) is the fact that teamwork and comradery is needed to get through a Tough Mudder course. It’s not designed to be done alone and it almost impossible to do so. 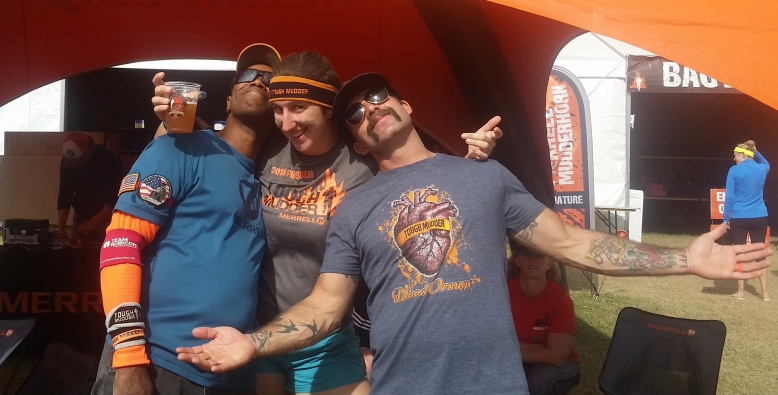 Chilling with Sean and Coach post-race

I can thank Tough Mudder for being the event that took me from a ‘weekend warrior’ to a full-blown OCR enthusiast as it was the first event that truly made me step outside my comfort zone. Since that first event I have become someone who is willing to try something new and challenge their abilities. As for my next huge challenge? My list of things to do in 2017 includes World’s Toughest Mudder (24+ hours of Tough Mudder) so here’s hoping I can make that dream a reality!

One thought on “Tough Mudder (Dallas)”