On the eve of my flight back to Australia I woke at 4am, groggily put on race clothes and sat in the car for two hours as my friend Kendal drove us to Savage Race in Houston. It was my last race before leaving the US so I made sure it was going to be a fun one.

The day began with a beautiful sunrise over the ranch as I patiently waited with my friend Jonathan and a host of other volunteers for instructions. Eventually we were allocated at an obstacle – wheel world – so off we went to wait for the race to start.

Wheel World is a featured Savage Race obstacle which I failed to complete in Dallas. Consisting of five pentagon shapes wheels, the idea is to swing from one rotating wheel to the next without falling into the water. While we waited for the first runners to come through Jonathan and I thought it would be fun to just spin on one of the wheels, which was great until the dizziness set in. 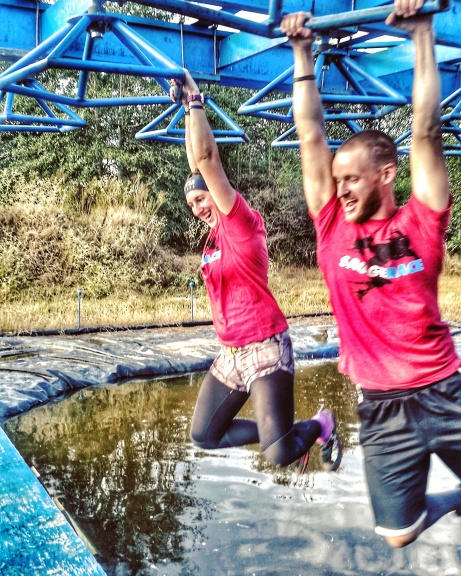 Eventually the first runners came through and while a lot of the elites managed to get through first try, some struggled and fell into the water. Elite runners are given a blue wristband at the start of the day and if they choose not to complete an obstacle they have to hand in the wristband. As two female racers handed their bands over to me I promised myself that I wouldn’t give up until I’d conquered wheel world in my own race.

After cheering on the elites and various other friends it was my time to head out on course. I joined about 30 other volunteers in the start corral and at 1:20pm I started running.

I’d been told by two friends that the first half of the course had the worst terrain and was boring (as in there weren’t many obstacles), and they were right. I ran along in the soft sandy terrain and it was almost a kilometre before I hit the first of 24 obstacles – the barbed wire crawl. This one was nice and short (maybe 4m long) so it was a nice change from the never ending crawl at Spartan the previous weekend.

My aim for the day was to do every obstacle unassisted, unless I really couldn’t get through one on my own. I also wanted to beat my previous time from Dallas where it took me three hours to get through the 9.2km course. In Dallas I was too busy mucking around with my fellow Lone Star Spartans to worry about time!

I walked in the soft sand and ran on the hard ground towards the giant log hops before conquering wall after wall. The walls included:

I redeemed myself after my terrible performance in Dallas by getting over the 8’ wall without much hassle, and even stopped to offer advice to some first-time racers. 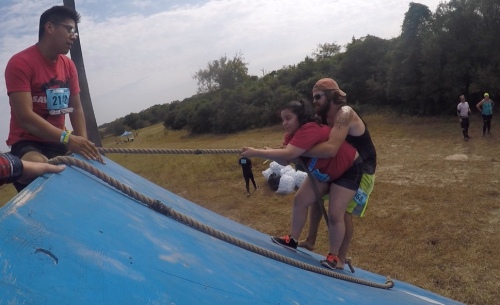 This is what OCR is about – helping others complete obstacles.

Next was a brand new obstacle called Hangarang. The aim is to traverse two logs that are suspended over water by chains. The first log is thicker than the second and there’s a gap of about 30-40cm between the two logs. If your hands touch the log or you touch the water you have to start again. There was a rope and chains to hang on to which made it easy to get through, even after my moment of hesitation. 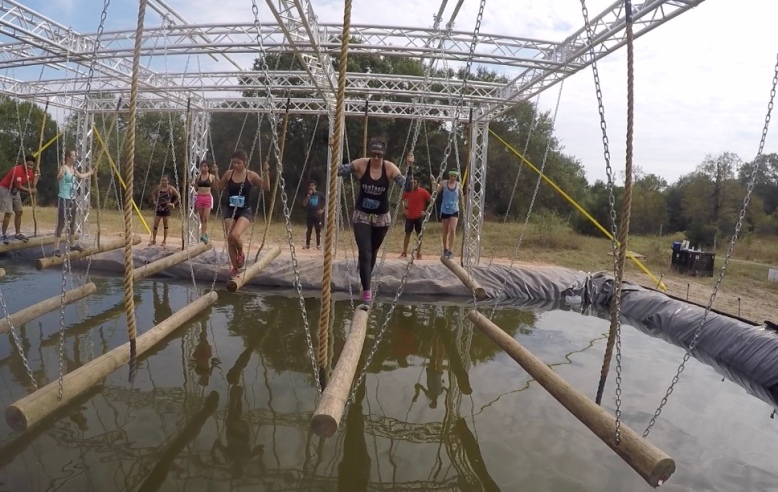 It was time to get down and dirty in a barbed wire crawl through mud, but thankfully Savage let us clean off straight away as we jumped off a 3m high platform into water at Davy Jones’ Locker. 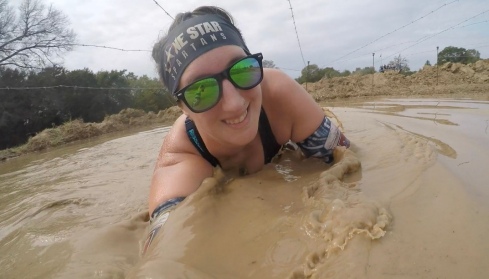 Climbing was the next theme of the day as I followed others climbing the Big Cheese (a wall with holes in it) and the cargo net. Then it was time for me to face a nemesis – Colossus. In my recap of Savage Race Dallas, I wrote about the crazy quarter pipe that is Colossus. I ran full speed at the wall and grabbed the rope before I started to pull myself up. I had my hands over the edge when I felt my feet slipping off the rope so I called out for some help and two racers helped haul me over the edge. I was disappointed that I didn’t get it on my own but I will get it next time! 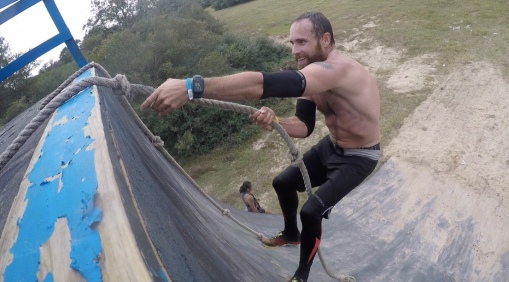 The reward for getting up Colossus is a huge water slide which freaked some people out thanks to its height. I thought I went down with a smile on my face, but the race photos tell a different story! 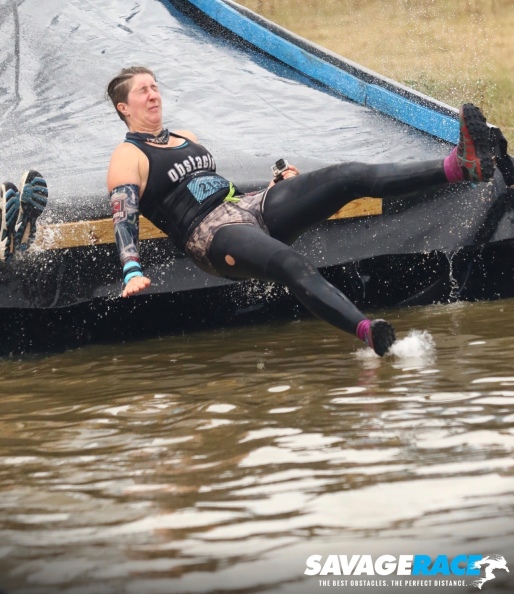 I’m not sure whether the race directors purposefully put grip-based obstacles after water on purpose, but wet hands really don’t help on monkey bars! I arrived at Sawtooth (monkey bars) with wet hands and scrambled to find some dirt and dry leaves to dry my hands on before attempting the obstacle. On my first go I got halfway up before slipping on a wet handle but I wasn’t going to give up. On the second go I chose a different lane and made sure my hands were as dry as possible. I climbed one rung at a time until I reached the middle and in a moment of surprise I lost my grip and fell into the water below. Thankfully the photographer captured my worst race photo ever just before I slipped. 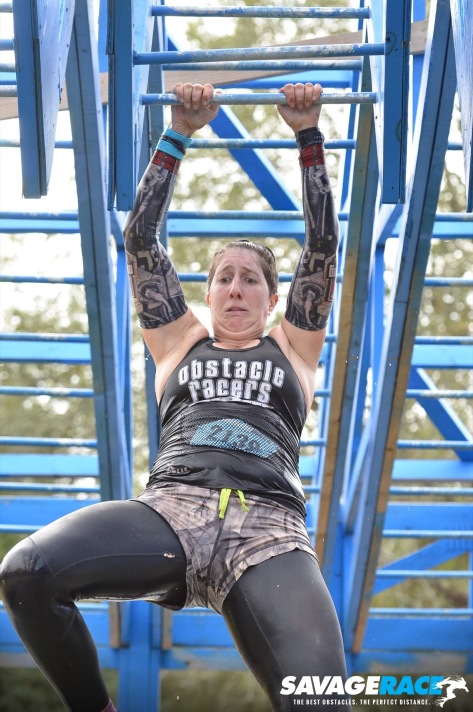 Feeling dejected but elated for getting that far, I ran through the trees towards Shrivelled Richard (ice bath) which was particularly cold thanks to the lack of sunshine. Then I followed some other ladies through the mud and under some barrels before ending up with wet hands at Wheel World.

Now it was my time to shine! My first two attempts were failures as I got to the third wheel, failed to grab the fourth in time and so had to fall due to lack of momentum. The key is to keep moving as once momentum is lost people will fall. On my third attempt I got through easily and one of the medics watching told me to go again to prove it wasn’t a fluke. So I did, successfully. That was for the two elite ladies who couldn’t get through it themselves. 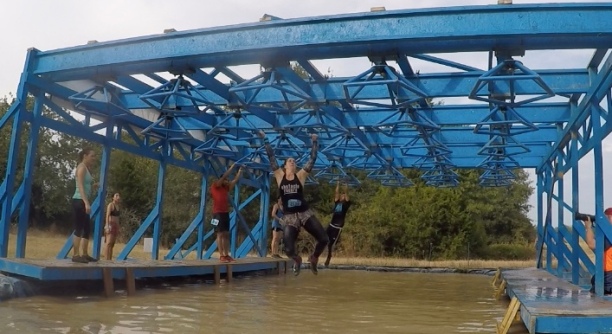 I had just over 3km to go and there were still several obstacles to face. I got through the traverse wall on my first go (after failing it three times in Dallas), practiced my yoga skills on Pole Cat, before falling into the water at On the Fence.

When I was at the traverse wall (named Kiss My Walls) I realised something about myself and my choices. In Dallas I’d failed that particular obstacle three times because I just told myself that it was too hard and I wasn’t able to do it. I chose to give up and fall off because I didn’t have faith in my abilities. This time however, I managed to get through on my first attempt and it was surprisingly easy. This realisation is important as I tend to give up on obstacles far too easily because I choose to give up, rather than because I physically can’t do something. While it didn’t help me for the rest of this race due to sheer exhaustion, it’s something I need to keep in mind for future races. 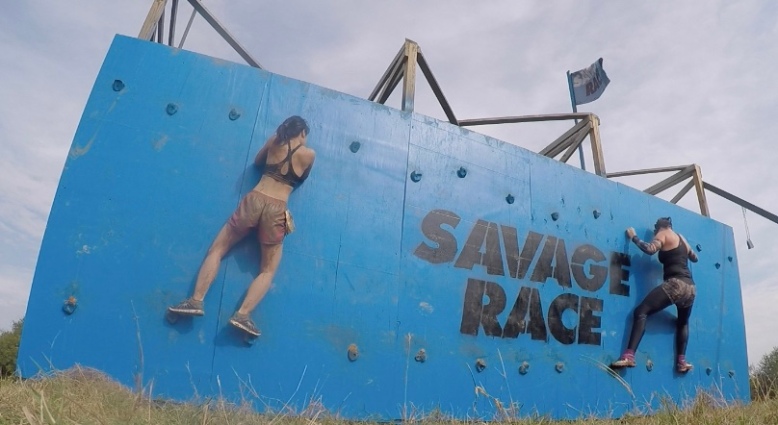 The wood carry was barely an obstacle for me as I walked hastily around the required markers. The Teeter Tuber proved to be a challenge as I couldn’t figure out how to get my body up the thin tube to a point where it would tip and allow me to slide down. So I enlisted the help of some fellow racers to lift the tube with me inside. I’m not sure how tall people get through it but I need to find out for next time.

The Tree Hugger had doubled in size since Dallas and proved to be much too difficult for my exhausted brain to figure out. So I dropped off and attempted the last obstacle – the platinum rig. 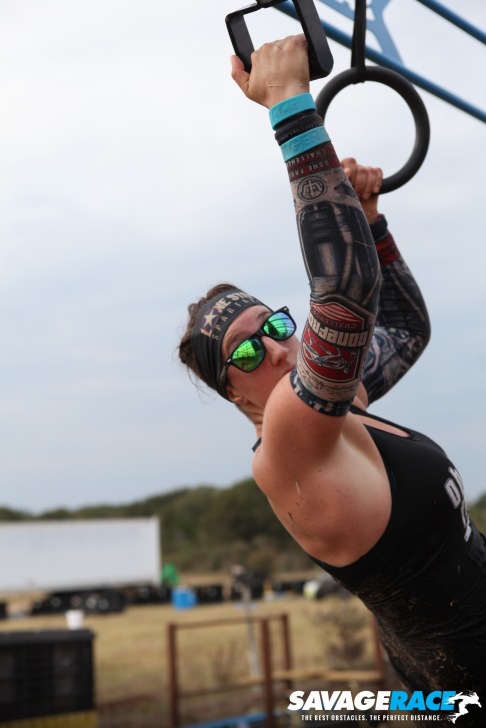 I crossed the finish line after 2.5 hours. 30 minutes faster than in Dallas, on a course that was 2km longer, with more completed obstacles than in Dallas and with less assistance. Running alone is definitely the best thing for me as I’m not distracted by others and am more determined to get obstacles done on my own. I realised that I need to trust in my abilities and not let my choices distract me. I will have to return to Savage Race and run in the elite wave next time to see just how far I can get with my band! 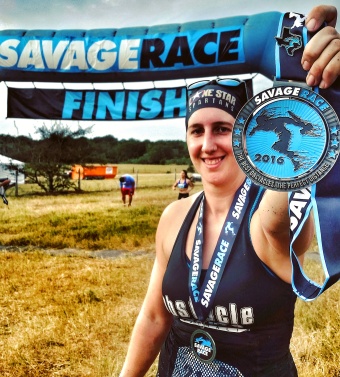