It only took a few minutes of conversation for my friend Josh to convince me that the Icebug Tussock Traverse should be my first event for 2016. A 26km trail run through Tongariro National Park on the North Island of New Zealand was just what was needed to start my year off with a bang. I signed up, spent two months planning and training, and soon enough I was in Auckland and ready to go!

Tongariro National Park is a four-hour drive from Auckland. Josh drove as I sat back and enjoyed the beautiful scenery that the North Island had to offer. Just as the sun began to set we saw the outline of Mount Tongariro in the distance and the excitement started to set in. It was quickly replaced by nerves as we arrived at our hotel for the night. 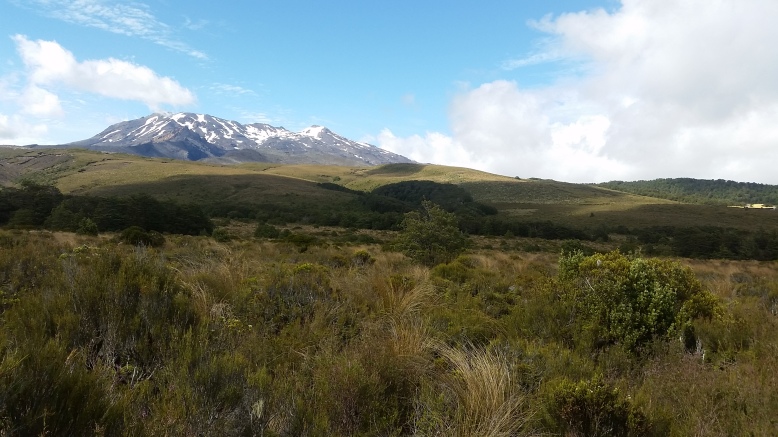 The traverse was going to be the longest trail run I’d ever attempted and despite the nerves I knew I’d be ok. I had my mandatory gear stashed into my Camelbak, I had enough VFuel gels to get me through a few hours of running, and I had my beanie perched on top ready for the cold morning. When my head hit the pillow on the Friday night I was focussed and hoping for a good Saturday. Unfortunately, my body had another idea.

I woke up on race day to find that my sinuses were completely blocked. I was lethargic, had a bad headache, and felt pretty lousy overall. Not exactly the best feeling for race day. I knew it would be a risk to attempt the 26km crossing when I wasn’t well, so I said goodbye to my friends and as they headed off to the start line I headed to the Chateau to change my distance.

Luckily the event offered two other distances – a 13km run or walk, and a 6km run or walk. I didn’t come all the way to New Zealand to just do a bush walk, but I knew that 13km would be too much to attempt when I wasn’t feeling well, so I settled on doing the 6km run. The later start time meant I had a few hours before my race started, so I made sure to have some water with electrolytes to ensure I was sufficiently hydrated going into the run.

Josh had introduced me to the  Icebug New Zealand Reps, Tim and Arlette, the evening before the race. Upon arriving at the Chateau I spent some time talking to them about the race and their shoes and they offered me a pair of the Icebug Mists to test on the run. Normally I wouldn’t go into an event having never worn a pair of shoes before, but for 6km I knew I’d be fine. I removed my Inov8s, put my orthotics in the Mists and off I went.

Before long it was race time. I quickly blew my nose one last time and headed to the start line. My race strategy was to run all the downhill and walk all the uphill sections, ensuring to take time to rest when needed. My breathing was laboured which meant I had to focus on keeping stable breaths during the run. Instead of a starting gun they had a starting conch, so as the conch sounded off we all went.

Finding an easy pace was essential, so I hovered towards the back of the pack to allow the faster runners to get through. I settled on jogging just behind a mother and daughter as we jogged the first few hundred metres of the course. The first few kilometres were full of gentle ascents and descents on some easy terrain, with a great view of snow-covered Mount Tongariro in the background. There were ample opportunities for me to rest whilst walking, all whilst taking in the amazing scenery.

Just before the 3km mark the path took a turn up a slight rocky hill. My inner mountain goat made a very brief appearance as I bounded over the small boulders, and the many years of trail running meant I could still run through the rocky areas and not fall flat on my face. I did stop briefly to take a few snaps of a gorgeous waterfall, and catch my breath before the second half of the course.

Soon enough I found myself running through a beach forest, complete with flowing river next to the path and some much needed shady trees. Despite a cold start to the morning, the weather heated up pretty quickly! I navigated my way on a slight descent through the trees, passing hikers as they strolled leisurely up the path, narrowly missing some giant tree roots in the middle of the path. When my watch beeped at the 5km mark I knew I was on the home stretch, so I climbed the last few steps, headed out of the forest and started towards the Chateau and the finish line.

I was back running on the alpine track and so with no rocks or roots in sight I kept pushing myself to finish without walking again. Passing the photographers I took a moment to Strike a Messner (a pose named after my friend Laura Messner), and then headed up one last ascent before rounding the corner to the finish. I crossed the finish line in just under an hour and was relieved to be finished. 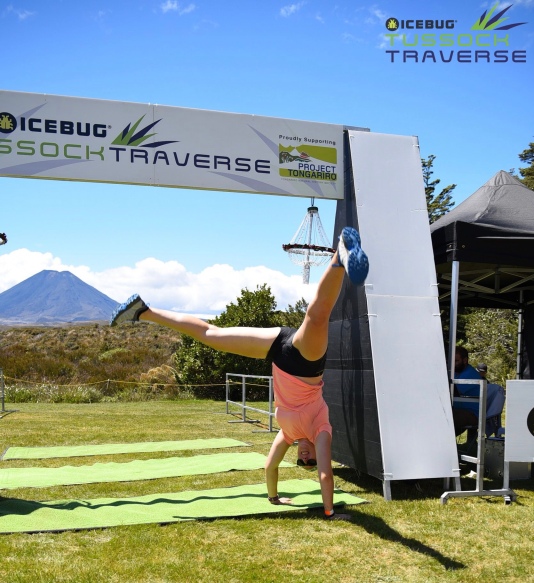 The best way to cross a finish line!

Despite being sick, I really enjoyed the run and the event was fantastic. The course terrain was quite varied with the compacted alpine track that weaved through old lava fields, the beach forest with the roots trying to trip us up, and the rocks that required some quick foot work.After the race Arlette challenged me to get in the Icebug Icebath to relieve my sore muscles. I jumped in but about 4 seconds later I jumped back out as it was far too cold. I took off my long pants and sat back in a beanbag to soak up the sun as I waited for my friends to finish their traverse.

The shoes were absolutely amazing, and I was lucky to have so many different types of terrain to test them on. The Mist provided grip when I needed it, comfort for the whole run, and the mesh meant my feet stayed nice and cool when the weather heated up.

Distance: 6km. There are also 13km and 26km options