They say that fortune favours the brave, and I had to either be brave or nuts to accept an unknown challenge posted by Max (Spartan Race Director, Australia).

The only information provided was that the challenge would start at 5:30am the following morning, and anyone participating would need a GPS watch and water. He hinted that it would not be 1km of burpees so I was feeling ok about what it may be. He did mention that instructions would be provided before starting and it would take approx 2 hours to complete. I was certainly intrigued, so I found a park near the hostel I was staying at in Melbourne and told Max that I was in.

I set my alarm for 4:45am and before heading to bed I decided to check Facebook one last time. That’s when I saw it – the challenge. I opened the video to find that Max was true to his word – we weren’t doing 1km of burpees, but 3km instead! The first thought that popped in my head was along the lines of WTF? Still, I wanted to see how far through I could get so I went to sleep ready for the early start.

Unfortunately staying in a hostel meant I was woken several times through the night by people snoring and motorbikes speeding by. When the alarm went off at 4:45 all I could think of was ‘don’t make me do this!’ I got out of bed, got changed, grabbed a quick protein shake and banana and headed to the park.

The most burpees I’ve ever done before was 40 minutes worth in the WOD I called ‘burpee hell’ and I’ve actively avoided doing that many ever again. This was going to be worse, but I wanted to give it the best shot I could.

I arrived at the park to find that the sprinklers had been on overnight, meaning that the lovely grass I wanted to burpee on was soaking wet. I did manage to find a strip of dry grass, but the strip was also littered and went straight past a smelly public toilet. But it was the only place I had to do the burpees, so I put my things down ans with only a possum as company I got ready to start the burpeethon.

One burpee, two burpees, three burpees, this was easy! I had my music going to keep me distracted from the fact that I was doing burpees on smelly lawn at 5:30 on a Friday morning, and I kept pumping out the burpees. The first 50-100 metres was easy. Hands down, feet back, push up, feet together, jump! After narrowly missing some old coffee cups, I was feeling pretty good, and had already worked up an epic sweat. I peeled off my long sleeve top and got rid of the headband, had a swig of water and kept going. Burpees in the dark.

The 200m mark was when I hit the invisible wall. My hip had started hurting, my hands stank from the grass and dirt, I was starting to feel nauseous because my banana hadn’t digested yet, and I just didn’t want to be there anymore. I made a deal with myself to at least complete 500m of the burpees, as there was no way I could pike at 200m! So I kept going.

The last hundred metres of burpees were still on form, but my jump was getting a lot smaller. Thee were people walking by me on their way to work, or just out for an early morning stroll, and every single one looked at me with a face as if to say ‘what on earth is she doing?’ Travelling burpees! Care to join?

When I looked at my watch to see I’d gone 490m, I gave it everything to get those last two burpees done and then collapsed on the ground at 500m. I had a headache and my stomache was somersaulting, but I’d reached the goal I set for myself and hadn’t given up.

Normally it takes a lot of self-motivation to get me out of bed and to do training so early in the morning. I’m definitely an afternoon person, and the thought of such an early wake up normally should have caused me to ignore the challenge and just watch everyone else endure the challenge. For some reason unknown to me yet, I wanted to do this despite the start time and the fact that I’d be on my own. Part of it is knowing that for the next three months I’m going to be spending a lot of time on my own, and so I’ll need to dig deep and find that self-motivation to do training on my own. I love the environment of OCR and Crossfit for the very reason that I’m always surrounded by awesome people when doing something tough, so being on my own for this was a true challenge.

I’m glad I accepted this before knowing what it was, and I’m glad I hauled my bum out of bed and got it done. I am disappointed that I didn’t get past 500m, but it just means I have to re-do the challenge. Next time I know to ensure I get up earlier and let my food properly digest, and to also find grass that isn’t covered in litter and doesn’t smell like pee. 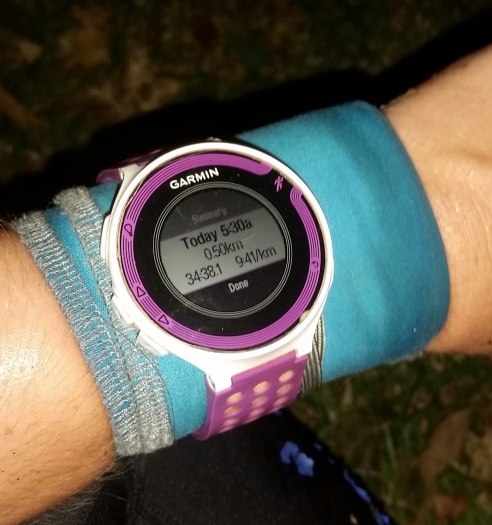 Here’s to the next challenge!