It was July 2015, and I saw a post on Facebook about an event called The Suck – a 12+ hour event that is designed to test your physical and mental boundaries. 2016 was the year to challenge my boundaries so I signed up right away.

I’d been so focussed on preparing for three months of travel that I’d done no specific training for The Suck. I was still nursing an injured elbow so even my regular training was on the lighter side of the spectrum. The week before the event I went through the list of mandatory items, bought enough food to last me up to 15 hours, and made my sandbags. As I packed the car on Friday I thought I was ready to go.

The theme of the event was The Good, The Bad and The Ugly. Little did I know how ugly things would get throughout the night.

I arrived at Rushton Park in Kelmscott and started getting my gear sorted for the night. I hadn’t been feeling the best throughout the day and was lacking in energy. I was concerned about how I would stay awake for the entire night without the help of caffeine but I figured that if I used to stay out all night when I was younger, surely I’d be able to do it now. I met Joe and Nicole Decker (owners of Gut Check Fitness), said hello to my fellow competitors, and waited for instructions.

See you on the other side!

I had my sandbags weighed to ensure they were both 13.6kg, and then noticed everyone was talking about weighing their buddy bags. I had no idea what they were on about, and I started to get worried. After speaking to Nicole, I learned that my duffel bag was meant to contain weight equal to half my body weight. We were an hour out of starting the event and I had only just learned about this major part of the event! The list of mandatory items just said we needed a duffel bag. It didn’t state that it had to be filled with weight. Luckily a few others hadn’t filled their bags, so we dashed off to Bunnings to get some sand.

We got back with over 200kg of sand to split between four of us and I started to fill my duffel bag with 44kg of sand. This was not a good start. After so many months of not doing heavy lifting, I was concerned as to how I would manage to get a 44kg sandbag on my shoulders! I was very agitated as I hadn’t had time to train with such a heavy load and was certainly not prepared mentally to do whatever was required with the load. When I picked up my bag to weigh in I was astounded by the weight. It was too late to back out so I quickly taped up the end of the bag and waited for the briefing.

Joe and Nicole formerly introduced themselves and explained why they created The Suck, and the Gut Check (4 hour event). I was in awe to hear that Joe had won the Death Race twice before and it just made me keen to push myself to new limits over the course of the night. However, not knowing about the buddy bag had me very worried as I wasn’t mentally prepared to carry that weight.

We’re only a little bit crazy!

We started off with a warm up jog around the oval, then it was time for travelling burpees (my favourite). We had to do one lap across the oval to a tree before running back to await further instructions. After finishing the burpeess I ran back to Nicole and was given my next task: 10 reps of ground to overhead with a sandbag, followed by 10 chest presses. A 13.6kg sandbag is light for me so I managed to get through that task very quickly. I then headed back to Nicole and was told to grab my Camelbak and buddy bag (the 44kg monstrosity), and walk across the oval to the volunteer who would give me my next instructions. I had assistance i getting the bag onto my shoulders and was then ready to rumble.

I had barely walked 10m before I realised that I was very uncomfortable. My duffel bag was quite big so I’d left the 20kg bags of sand intact inside and then taped the end with duct tape. I had just started across the oval when my left arm started getting pins and needles from the weight of the buddy bag. I tried to get comfortable but couldn’t move the bag enough to unpin my arm. I trudged across the oval and crossed the road before things took a nasty turn.

I stepped up onto the kerb when my foot kicked some dirt, causing me to roll my ankle and fall to the ground. The sandbag went flying, my head lamp flew off, and I burst into tears. My ankle started throbbing and in that moment I didn’t want to continue. There was no way I wanted to carry a 44kg bag up hills when I had hurt myself. Luckily there was a volunteer stationed right where I fell, so she radioed in that I’d fallen and that she would advise Nicole if I wanted to continue. I wasn’t going to completely give up, so Nicole agreed to let me do the Gut Check instead. I was helped to my feet and the volunteer helped me carry the bag back to the gear drop area whilst I continued crying.

My ankle was feeling tender but I was still able to walk on it, so I decided to continue doing the Gut Check. I was told to grab a sandbag and bucket, head back across the road and follow the glowsticks into the bush. I trudged up the road and tried to calm myself down and focussed my thoughts on the task at hand.

I headed into the bush and followed the tape for a few hundred metres up and down hills until I got to the first checkpoint – The Good. I was met by Joe and Janet who told me to drop my sandbag and bucket and head back to base. I headed back down the hill and did some light jogging on the footpath to test my ankle and was surprised at how good it was feeling. When I got back to base I checked in with Nicole and was told to do two laps of the travelling burpees that we had done earlier.

Two laps of burpees done, it was time for 25 reps of the sandbag ground to overhead, and chest press. I then had some food before heading back out to the bush to find my bucket and sandbag and carry it to the second checkpoint – The Bad. As I walked up the hill sans bucket I realised that my legs were feeling sore. I hadn’t noticed the pain when I’d been carrying the sandbag as I had been so focussed on not letting go of the bucket. Janet was babysitting my bucket and sandbag and together we walked to the next checkpoint – The Bad.

I dropped my sandbag and bucket for a second time and headed back to the base for another five laps of travelling burpees, . By this stage in the night I was stepping rather than jumping in my burpees to save my ankle, but amazingly I was finding them easier as the night went on. The burpees were followed by 50 reps of sandbag ground to overhead and chest presses.

I was already exhausted but kept pushing on as I knew the end wouldn’t be too far away. I finished all my reps and headed back into the bush to find my bucket and sandbag for the second time.

Getting to The Bad checkpoint, I picked up my bucket and started the climb through the bush to The Ugly. This was by far the longest climb and although it wasn’t very steep, the gravel made it feel like I was climbing up the side of a mountain. My forearms were burnt out from holding the bucket as it was the most comfortable way of carrying the sandbag. Each time I stopped I turned to face the city and took a moment to appreciate the beauty of seeing all the lights of Perth shining in the distance. Whenever  I wanted to give up I’d remind myself of why I was there – to prove to myself that I’am stronger than I think I am.

As I rounded the last corner I heard the voice of Joe and one of the other volunteers. I checked in and took a few minutes to catch my breath and shake out my arms before heading back down to base with my sandbag and bucket in tow. My ankle was starting to hurt again and I just wanted to finish. When I got back to the base I was tasked with doing 10 sandbag squats and 25 sandbag sit ups which I finished in record time. Then I had one more task to do: one lap of farmers carry with my buckets and sandbags inside, and I was done! I grabbed the buckets and headed around the oval for the farmer’s carry and stopped ever 50 steps to shake my arms and stretch my fingers,.

Those last few steps were done in silence before I threw myself on the ground. I was finished! I had been moving for just over 5.5 hours and everything hurt. Nicole raced over to congratulate me and present me with my medal as I lay on the grass trying to stretch out my back. 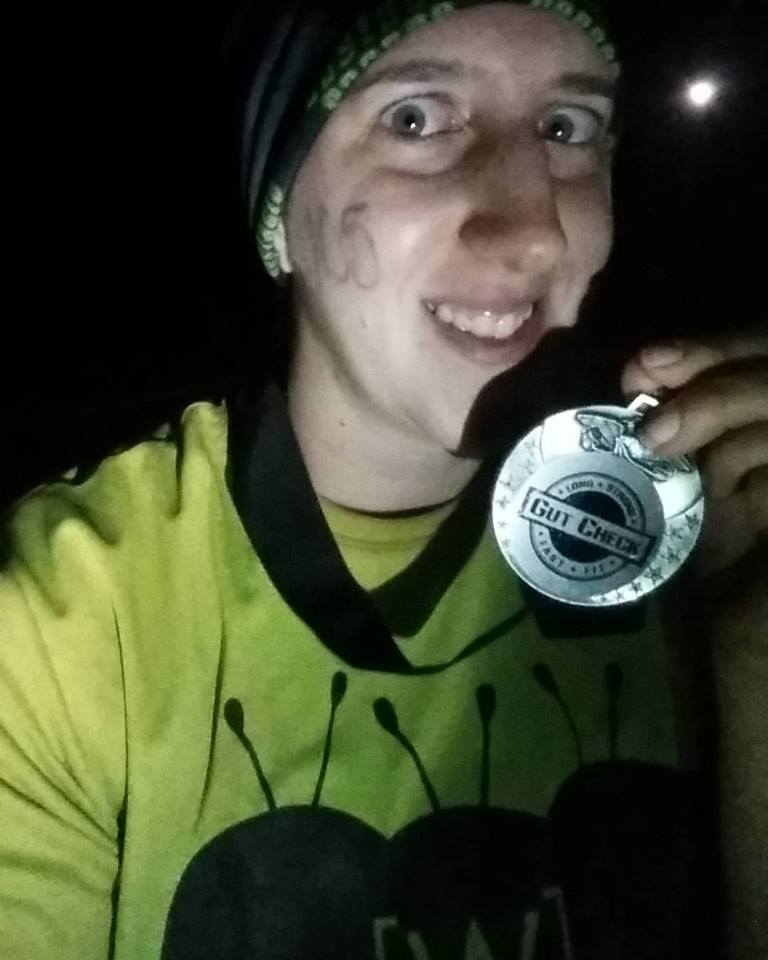 Complete with full moon in the background!

I am so glad to have had the opportunity to do this event, even if I did only complete the Gut Check instead of The Suck. If it hadn’t been for my sore ankle, I would have gone out to complete the rest of the 6 hours of tasks even though it wouldn’t have officially meant that I had done the Suck. I just wanted to see how hard I could push myself.

The main thing that was different for me in this event was the fact that I was alone so much of the time. I am so used to running alongside people and yelling encouragement, that when I was alone and climbing the hill with my bucket I had to rely on my inner motivation to get me through. There wasn’t anyone else there to yell words of encouragement, so I had to dig deep and encourage myself.

If there’s one thing I have learned from this event it’s that for me, mental preparation is much more important than physical preparation. I was not mentally prepared for that buddy bag carry and I have no doubt that I would have managed to get through it physically (if I hadn’t rolled my ankle), but my brain would have given up long before my body would have.

The aim of this event is to adapt and overcome. I know for next time to train physically and mentally for anything that be thrown at me and to focus on the positive to get myself through. I enjoyed pushing myself and can’t wait to try it again someday when I’ve had a chance to better prepare. If there is one thing I can promise though, it’s that I will never complain about a Spartan Race bucket carry ever again! After carrying a bucket 6km up and down a hill I think I can manage a short bucket carry in races!

Nicole told me that they’re holding an event in September called The UIltimate Suck. A 3 day event to test every mental and physical boundary possible. Now to decide if I’m crazy enough to attempt that 😉 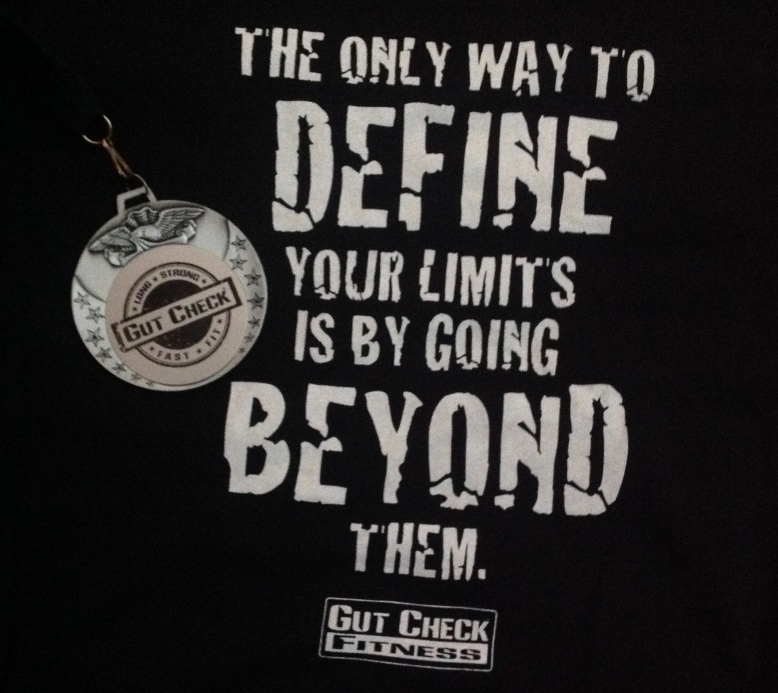