As I sat alone at a hostel in New Zealand in early August I had a decision to make. What would I be doing on September 17? Would I make the pilgrimage to Vermont to take on the Spartan Beast, or would I try something different and go to Conquer the Gauntlet in Arkansas? After a small amount of internal deliberation I made up my mind – I was going to Arkansas.

Arkansas isn’t exactly known for being a typical tourist destination, so when I told people I was heading to Little Rock to do a race I was often met with the question “but why Arkansas?”. I’d heard good things about Conquer the Gauntlet (CTG) and Arkansas was between Texas and New York so I figured I’d head along and see how it stacked up against the other OCRs.

I was almost 2 hours early for my volunteering shift on the Friday before the race so after some brief introductions to the owners and crew of CTG (including David, Stephen, Courtney and Brenna) I started helping set up the festival area. It was hot and humid and within minutes I had sweat dripping down my face. There were thunderstorms predicted for later that day and we all hoped that some rain would bring relief from the heat on race day. 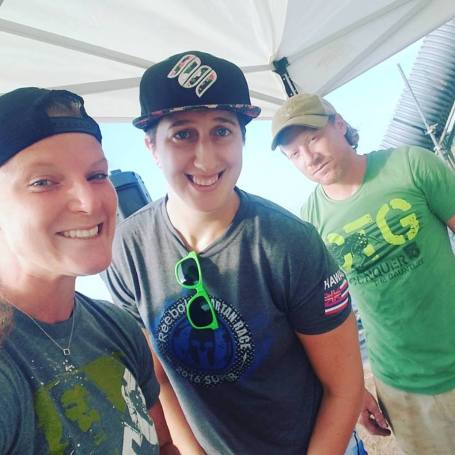 Thankfully Friday night brought some rain which resulted in an overcast sky when I arrived at the race site. The full moon was still lingering as I headed to the race site and the sunrise was unlike anything I’d ever seen. I knew this was going to be an awesome day so I put on some classic rock and got pumped up for the race.

When I arrived I quickly got registered before saying hello to some friends and getting warmed up. I dropped my bag off and heard David (owner of CTG) asking all the Pro wave competitors to get over the wall and into the start chute. While some OCRs have a 4 foot wall that you need to climb to get into the start corral, CTG has stepped up the game with a 6-foot wall. I’d heard people say that CTG was about walls, walls and more walls and here was the proof. 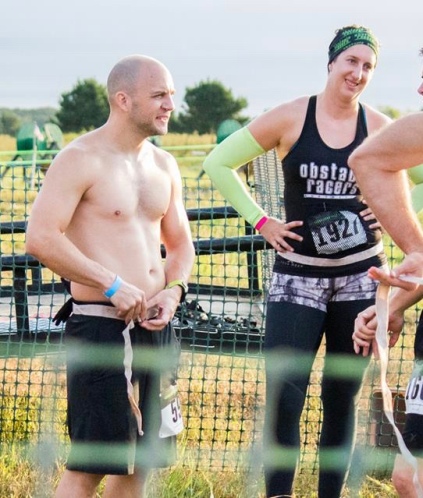 CTG is a mandatory completion course. For the pro wave that means that every obstacle must be completed, otherwise you turn in your belt that you picked up at the start line. I’d been convinced to do the pro wave just to see how I go, so I picked up a belt and prepared to run.

There were no fancy start line speeches, just David telling us the rules and safety tips before the starting gun was fired and we ran off. After narrowly missing a hole I arrived at the first obstacle – an inverted wall frame. On my first attempt I got stuck under the wall and couldn’t figure out how to get my chest on top of it. People were cheering me on as I lost my grip and went back for round 2. Thankfully I maneuvered my way up and over the wall before catching up to others wading through a muddy creek.

After a barbed wire crawl, I got to the monkey bars which were shaped like an upside down V. First you go up, then you come back down. Due to people having multiple attempts the monkey bars were wet so I kept losing my grip and falling into the water. After 5 attempts I reluctantly handed over my belt as I didn’t want to destroy my grip. It was quite disenchanting, handing over my belt at the third obstacle, but I’d never encountered monkey bars so early in a course and wasn’t warmed up enough to tackle them. It did however make me realise that I need to train monkey bars with wet hands to prepare myself for situations such as this.

I kept running and got to an obstacle called Belly of the Beast. You climb up a ramp and then hang off a cargo net whilst climbing down it to ring a bell. It was yet another test of grip strength as I made my way down the net towards the bell. 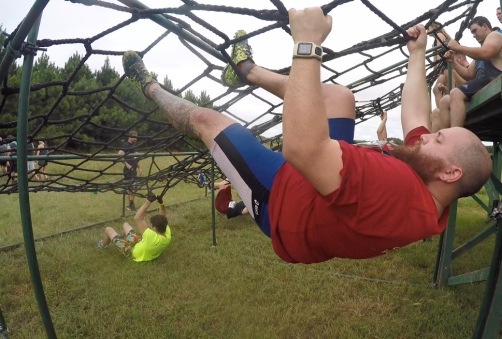 As I jumped off I ran through a small patch of woods towards Crank It Up which involved turning a handle to draw a tyre in, and then dragging the tyre back out. That was done fast enough and I continued jogging along behind some others when we started chatting.

We all got through The Trenches before hitting the Wall Scale which was a 10 foot wall with rock climbing handles. Some spun and others were teeny tiny, but after a few goes I got up with a little help from a new friend in a hot pink shirt. I said thank you and goodbye as I kept jogging and found myself in The Pit of Despair, a lovely mud pit with a tricky climb at the end. I stuck my foot in a nook and hoisted myself out and continued on to the Z-Beam (balance beams). 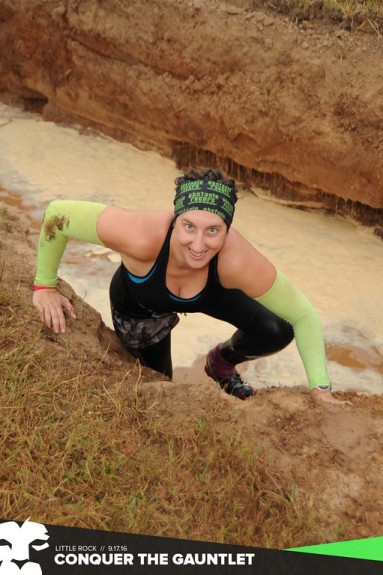 Everyone has their way of crossing a balance beam but I’d seemed to forgotten all of mine as I fell off the first three times. On my fourth go I was focused and walked to the end before jumping off and running towards an obstacle that I knew I wouldn’t be able to do – Stairway to Heaven. 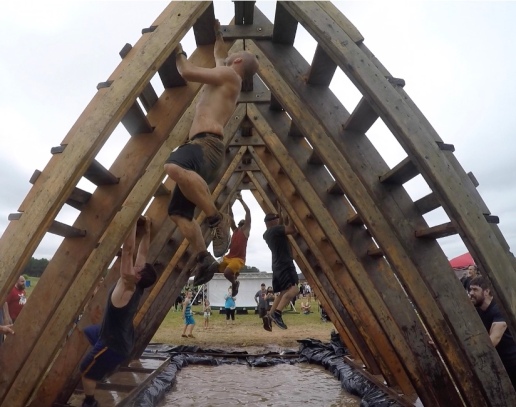 Imagine you have to climb wooden stairs, backwards, using only your hands, and you’ve got Stairway to Heaven. I watched as most people fell into the water and the occasional person got across the obstacle. I knew I wouldn’t have a chance to get across but I tried and accepted defeat after the second step.

The Continental Divide proved that slip walls can be harder than they look as this one was steeper and longer than most others. The volunteer was having fun watching people go sliding back down to the bottom after failing miserably. 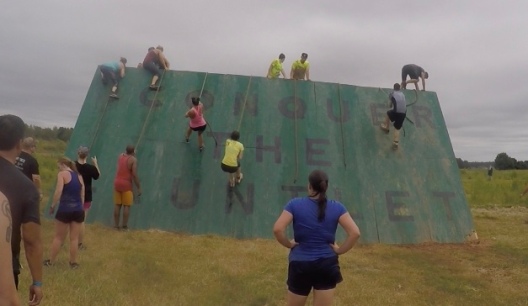 Next was Up From The Grave which saw us get into a vertical tube and go under the muddy water to get back out. I jumped in next to another girl and while she disappeared I was still staring out from above the tube. It gave the volunteers a good laugh to see me standing there after so many people asked how deep it was.

I got out of the water and slowly ambled on towards Pegatron. I saw a handful of the pro men standing by the obstacle with their belts still on as they tried to conquer the obstacle. CTG have taken a traverse wall, removed the hand holds, and given you pegs to plug the holes as you go along. I tried but couldn’t get through it so I just continued on to the Conquerors (sandbag) carry. 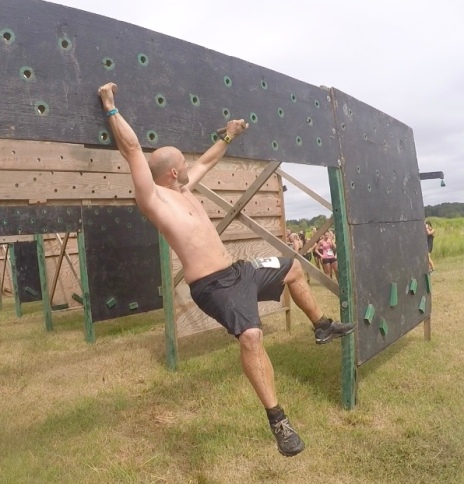 Then it was time for some walls. Three slip walls stood in my way as I took a few steps and jumped up them with ease. Being tall does have its advantages at times! I got over them before Slackin’ Off at the slackline. Someone had mentioned that the best way to cross it was with your hands above your head like a genie instead of out by your side. I tried it and got halfway across before falling. Some people seemed to get across with such ease whilst others couldn’t even take two steps. I kept falling at the mid-point so I just ran off and caught up with some friends at the Tarzan Swing.

I watched one guy go flying off the second last ring in an attempt to hit the bell before landing on his back and winding himself. I tried my best before deciding to continue on to the Great Wall – a 12 foot wall.

The first time I came across a 12’ wall in an OCR was at the OCR World Championships last year. Normally I can get over walls with ease but the 12’ one is a metal challenge for me rather than a physical one. I got up on the first ledge and was far too scared to jump to the second as I was worried I’d fall backwards. So I slowly climbed back down and vowed to get the wall next time.

The next few obstacles were fun! First was Hammertime, where we hit a block along a track with a sledgehammer, then climbed over a tyre wall at the Rubber Roadblock, before climbing a rope at More Cowbell and going through another creek crossing (the Swamp Crawl).

It was finally time to Conquer the Gauntlet with the 5 Walls. Five 8 foot walls are in front of you with the words ‘CAN YOU CONQUER THE GAUNTLET’ written on them. I got up and over the first before realising how tired I was feeling, and I still had another lap to go. I made my way over each one with the help of a fellow participant before getting over the Cargo Climb and finally running to the Torpedo and the finish.

Finishing an OCR with a waterslide is definitely the way to go! I’m sure I’ll be pulling a stupid face in the photo but it was nice to know that I was done. I’d finally conquered the gauntlet!

As I crossed the finish line I saw my friend Danial standing there with a medal in hand to give to me. He may not be medalling everyone anymore but he does make exceptions for his favourite Aussie.

I downed some water, had a protein bar and found my friends Mark and Jason before we headed out for a second lap. The second lap was about having fun and filming the obstacles and we figured if at least one of us did each obstacle it would still count.

On the second lap I surprised myself by getting to the peak of the monkey bars before just letting go and falling in the water. I don’t really know what happened other than I decided to let go. It made me realise that I need to work on my mental strength, as well as my physical strength, as that’s often my downfall when I can’t complete an obstacle.

Hanging with David (owner of CTG)

CTG may not be the biggest OCR, but they sure delivered one of the best courses I’ve ever run. Overall they had almost 2000 participants and everyone walked away with a smile on their face, a medal around their neck and bruises somewhere on their body. The obstacles may look simple to some but they were challenging and tested even the best athletes.

I had an absolute blast and will definitely be back to Conquer the Gauntlet in the future!