Bonefrog was a last minute addition to my 2016 race calendar. I’d seen their photos on Instagram but didn’t know much about the race. It wasn’t until they announced Dustin as their new race announcer that everyone on Facebook started talking about the series and I realised I could get to their Florida race.

The plan was to run my butt off so I could podium in the open wave, but things didn’t go the way I’d hoped. After saying hello to a surprised Dustin and being told by Amie to run like the clappers, I warmed up and tried to shake the nervous feeling inside. 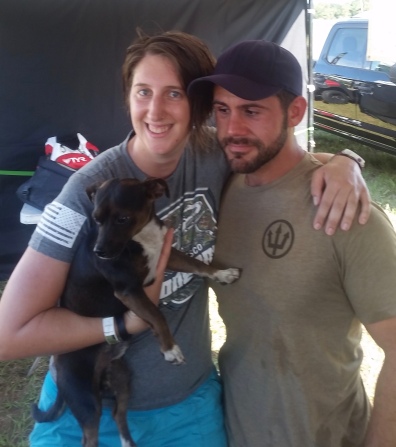 With Dustin and the neighbour’s dog

I headed off with the other Tier 1 runners at 8:45 and I told myself to get the race done in under 4 hours so I could minimise the time spent in the sun. I ran up and down the ditches before getting to the first obstacle – Rolling Thunder. It’s a 4’ high plank with car tyres so you have to jump up and over the tyres to complete the obstacle. I slipped and fell and so just did the 25 jumping jacks penalty before running on.

With Brian, owner and founder.

I ran through the cow field before heading into the woods where I slowed to a walk as I weaved in and out of the trees and over logs. As I hoisted myself over the 6’ wall I saw some people that I’d met the previous day so we said a brief hello before wading through the muddy swamp and narrowly avoiding some huge spider webs. I saw a memory test with six pictures so I memorised them and their placings before continuing on.

After a cargo net came more swamp walks and eventually we were out of the swamp and back onto the flat cow fields. But before we could race on we had to all pass the memory test. I saw several people doing burpees and I quickly went over the pictures in my head before answering correctly and continuing on.

There were a few wire crawls before a Tarzan swing style obstacle called Geronimo. As I alternated between a jog and a walk I came to the first water station and was so happy to see that they had iced water. I’ve very rarely come across cold water during a race so it was a nice relief from the heat!

I continued on my jog/walk along the sandy road before weaving in and out of more trees. There was a fair amount of distance between the obstacles which the runners all loved but I wasn’t too keen on. Eventually I came to the sandbag carry where Kevin, one of the staff members, stopped me to ask about course markings. There had been a section where people followed wrong coloured tape and had cut the course so he raced off to fix it, while I continued weaving through the trees and hoped not to come across any snakes. People often say to me that they don’t want to visit Australia because of the snakes and spiders, forgetting that the US also has dangerous snakes and spiders. 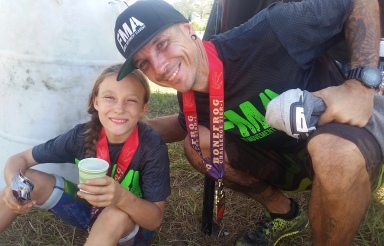 Mila is 9 and completed the Tier 1!

I clambered through a hole in another wall before giving up on jogging. I was feeling hot and could hear my breathing getting shallower as I went along. I had electrolytes in my Camelbak so I drank up and followed others as we weaved through some more marshes, climbed another (inverted) wall and crawled under some more wire.

As I got to the next obstacle – a set of 3 walls with holes to climb through, I heard the volunteer talk about burpees. She had a deck of cards and we had to pull a card, add 10, and then do that many burpees. I chose a card with a 10 on it which meant 20 burpees for me. I got them done and sluggishly walked to the water station and downed more ice water before sitting down for a few minutes and just throwing ice down my back. 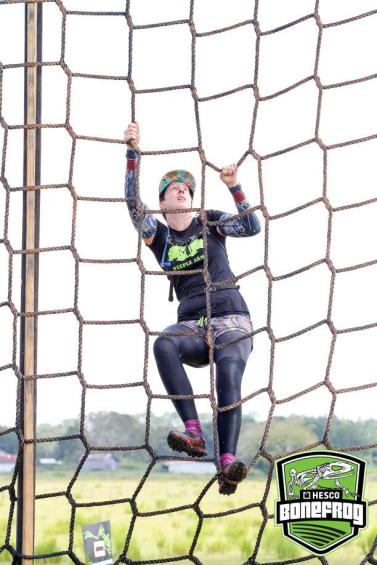 I was only 1/3 of the way through the Tier 1 but I was feeling over it. I was hot, tired, and grumpy and I didn’t want to go on. I had ‘I Don’t Want To Be Here Anymore’ by Rise Against stuck in my head but I knew I would have to get rid of the negative thoughts if I wanted to finish. More burpees followed as I failed Swingers Club but I just got them done and continued along.

The cattle had torn done some of the course markings overnight so I did my best to figure out my way through the trees as I hoped for more shade. The sun was relentless and while it was only about 35 degrees, the direct sunlight and the humidity made it feel like it was 45 degrees. I got over the boiling hot black 8’ wall and headed around a corner to a low crawl through the water. I, along with a few others, decided to just lay down in the hot water as it provided us a little relief from the heat. We all joked about alligators and hoped that we’d made enough noise to keep them at bay.

I hauled myself out of the water and tried jogging along in more flat bits before slowing as I got to the shade. I spotted two of the Mud Run Fun people that I’d met the previous day (of course I can’t remember their names – sorry!) so I had a brief chat before power walking along to another cargo net. Then it was finally time to get into some shade! The course took us through some bushes and some tall trees before making us go up and down some more sand hills.

Eventually there was another short cargo net climb and another water station. I sat down and drank more ice cold water before continuing on. There was a nice and short inverted wall, a very wobbly balance beam, more sand hills and another swamp walk.

After more walking through shady trees I then came across some interesting looking monkey bars. Drunken Monkey had hand holds on either side of a plank of wood, with some higher than others. I watched some others try it before I jumped up and had a go. When I was halfway through I fell. The photographer pointed out that I looked down so I jumped back up and did it again – this time getting through the entire obstacle as I kept my gaze upwards. When I jumped off I realised that I’d torn layer of skin off come parts of my hands but it didn’t hurt so I continued on. 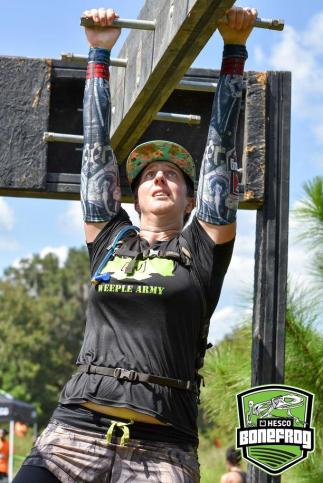 I took the penalty at the 9’ wall as there was no way I was getting over on my own. Next up was an obstacle called 31 Heroes where we had to do 31 burpees and call out the name of the 31 fallen as we jumped back up. It may have been tiring for us, but it’s nothing compared to what those people did I their lives. One of the names we had to call out was a member of the K-9 team.

After I completed my burpees I continued along the path and ended up at Hell’s Gate. Hell’s Gate is a series of walls – 4’, 6’, 8’, 6’ and 4’ – all right next to each other. I was exhausted but got over them all thanks to a ledge on the 8’ wall, and then stood breathless at Get a Grip. Get a Grip looks like someone had tied toilet rolls to rope and hung it from beams, but really it’s a tricky obstacle that I wasn’t sure about. Amie turned up at right that moment and asked how I was feeling. I teared up and shook my head as she handed me a Powerade and made me skull half of it before attempting the obstacle. I tried and fell so I did my 25 burpees and walked on to Dirty Name.

Thanks to Amie for pushing me!

Dirty Name involves jumping from one log to another higher one (often called the sternum checker at other OCRs). I tried not to psych myself out as I got onto the middle log and stared at the higher one. Thankfully my height was an advantage as I could wrap my hands around the log before I jumped, but even then I was still a little scared of the high one. But I did it.

Aime asked if I could continue on and get the Tier 1 completed. Even though I wanted to quit because of the heat I said I would carry on and get it done. So I did did the last few obstacles of the loop – including the Dead Weight hoist, slant wall and rope climb before slowly walking off to get another lap done.

The second lap was easy but so much hotter than the first one. After being back in the festival area I was feeling better and all the negative thoughts had left my head. I embraced the fact that I was feeling good and jogged along the road on my own.

On my second lap I got through all the obstacles with the exception of the 9’ wall and Get a Grip where I just did the penalties. I tore another layer of skin as I completed Drunken Monkey for a second time and my fingers were sore but it wasn’t going to stop me now.

The very last obstacle was called Black Ops. Bonefrog have put their monkey bars up high so you have to scale a wall to get to them. I took a moment before attempting to climb the rope as I was so tired and hungry that I didn’t want to pass out. I got up, started climbing, and just before I reached the platform my calf cramped and I screamed for help from the guys behind me. One pushed my other leg up and I rolled onto the platform and lay there face down for a minute crying in pain. Once the cramp subsided I stood up, put my hands on the rungs, and didn’t let go until I reached the other side of the monkey bars. I looked down and sore that another layer of skin had been ripped off but I wasn’t fussed as I was done. 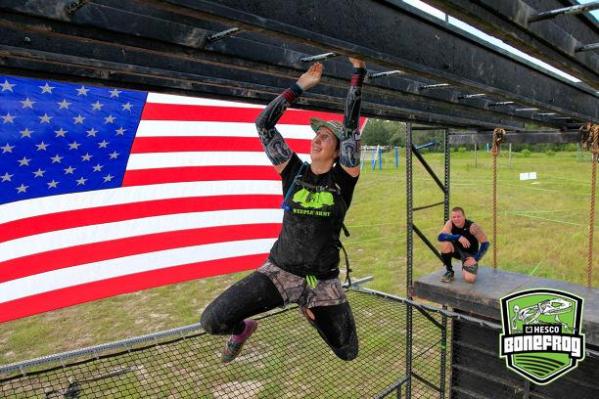 I crossed the finish line in tears and was met with hugs from the staff and my giant medal. The first thing I did was sit down and had ice put all over me as I tried to cool down. The awesome staff got me some food, electrolytes and a beer to help me get some carbs and sugar into my body.

As I lay on more ice and drank my beer I finally started feeling better and noticed someone staring down at me asking if I was ok. I responded with “what’s the current temperature?”. Because that’s the normal response to having someone ask if you’re ok (jokes). But thankfully the stranger (Terry) answered my question before helping me up and giving me a lift back home when I was well and truly done.

The heat was the biggest challenge of the day and so many people pulled out of the Tier 1 course because of it. Having iced water at each water station made a huge difference and the little shade we did have was a relief to everyone. While some obstacles weren’t as challenging as other races, they were all different and it was a fun course. If there’s one thing I realise every race it’s the power of mental strength – if you focus on getting through then your body will follow.

Overall the Tier 1 course had 50 obstacles in 24km and it took me 6.5 hours to complete. Was it brutal? Yes. Would I do it all again? Definitely! 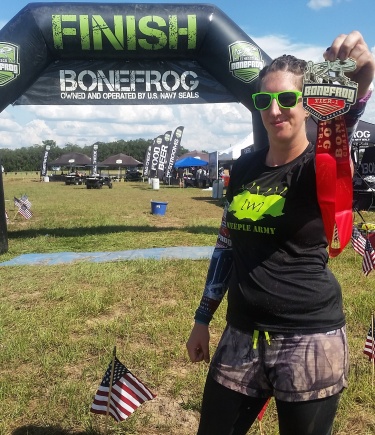